Where Horses Wet Their Whistles 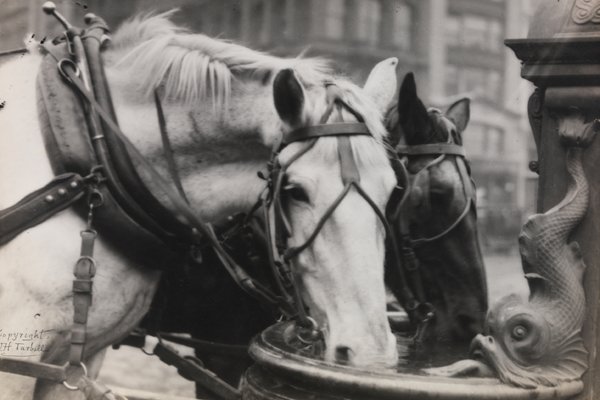 So, with both main mayoral candidates opposed to allowing horse-drawn carriages in the streets, a major chapter in the history of New York may be about to close. The first horses served man here no later than the 1620s, and since then they have pulled, plodded, trotted and galloped in our service.

True, they have endured many horrors under the human hand, but we have not been entirely ungrateful, and John Hooper’s monumental 1894 fountain at West 155th Street and St. Nicholas Place is a moving tribute, even if it has no customers.

New York in the 19th century was an astonishingly cruel place — for children, for the poor, for the sick. So it was not hard to turn a blind eye to even the most ghastly kinds of animal cruelty, even after HenryBergh founded the American Society for the Prevention of Cruelty to Animals in 1866. Horses were routinely turned out into the street to collapse and die, days later. Drivers mercilessly beat their animals, or ran them lame, with open sores, in all weather.

Clay McShane and Joel A. Tarr’s 2007 book, “The Horse in the City: Living Machines in the 19th Century” (Johns Hopkins University Press), suggests that the larger companies relying on horses had great incentive to treat them well. For instance, in 1874 the horsecar lines began stopping only at corners, rather than wherever they were hailed, because it was easier on the horses. There were then about 40,000 horses in New York City.

The industry calculated that 2.5 miles per hour was the optimum speed for horses, because they could pull a heavy load much farther at that rate than at 10 miles per hour. Many street railway companies restricted a horse’s time on the street to five hours a day.

There was a parallel horse community in New York: the animals of the rich, which were brushed and washed and bedded down on thick straw in sumptuous private stables, including the block on 73rd from Lexington to Third Avenue in Manhattan; and, in Brooklyn, Vanderbilt and Waverly Avenues, which are the flanking service streets to the mansions of Clinton Avenue. Few of those horses felt the lash, or suffered bleeding wounds, or endured thirst on hot days.

For the others, public fountains were erected at least as early as the 1860s, often in conjunction with those for dogs and humans. The businessman John Hooper left $5,000 in his will for what one of the most elaborate troughs in the city, at West 155th Street, designed by George Martin Huss and completed in 1894. Centered on a stone shaft, it has a wide circular basin on one side for horses, small ground-level bowls for dogs and, on the other side, a drinking tap for humans. Atop the stone shaft is a pierced metal globe, illuminated from within.

This elegance formed a strange counterpoint to continued, regular cruelty to animals. For instance, among those arrested in 1893 was a driver who beat his draft horse with a whip handle so hard that the animal lost an eye; in 1894 a Columbus Avenue expressman was arrested for stabbing his horse to get him going.

Few city fountains had the architectural ambition of Hooper’s, but there are still about a dozen similar to the simple troughs on Central Park South at Fifth and the Avenue of the Americas now used by the carriage horses. According to research conducted by Michele Bogart, a professor at Stony Brook University who has written widely on civic art, the A.S.P.C.A. alone had put up more than 100 such fountains by the early 1900s.

This burst of civic empathy took place just as the horse’s place in the economy of the city was waning. According to “The Horse in the City,” streetcar interests calculated in 1890 that electric streetcars cost 2 cents a mile, whereas horsepower cost 4 cents a mile.

After 1900 the advent of steam and gasoline vehicles forecast the end of the horse’s utility. In 1931 The New York Times reported that 8,000 horses were resident in Manhattan, served by 44 fountains and watering troughs. Horse-drawn vehicles still delivered milk, ice and other items, since the horse could proceed on its own to the next delivery point, while the driver made the drop.

In August of 1946 The Times profiled John Gauci, who served as the A.S.P.C.A’s inspector of watering troughs, fending off people who used them as ashtrays, oceans for toy boats or basins for washing laundry. Mr. Gauci, the newspaper reported, “frequently finds dead fish in the troughs,” which “horses don’t like any better than you do.” That summer the A.S.P.C.A. operated a horse-watering truck, but it and Mr. Gauci’s position were on their way out.

The present controversy turns not just on the driving of carriages in Central Park, but also on the distance that the approximately 200 carriage horses must travel through heavy traffic from their stables on the Far West Side.

Nineteenth-century New Yorkers would be astounded at the idea that such a modest trip constitutes a hardship, but over the years, the concept that carriage operations amount to cruelty has gained ground, and the mayoral candidates, Joseph J. Lhota and Bill de Blasio, have both called for the end of the practice.

It appears that the sound of clip-clopping hooves, except for those of police horses, may soon vanish from the streets of New York, just as the private stables were long ago converted to studios and garages. The drinking troughs on Central Park South may go dry; you can’t lead a horse to water if there’s no horse.