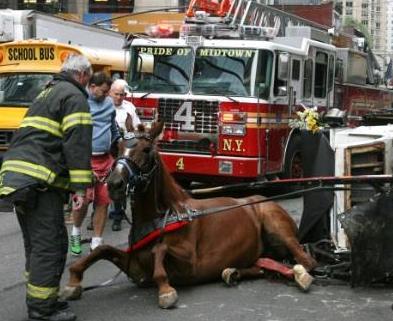 Last week's carriage horse accident where Chris the carriage horse spooked and flipped over in Columbus Circle traffic was a wake up call that we cannot forget in the upcoming general election for Mayor and City Council.

Had Quinn won the primary election last month (our worst nightmare), she would have ignored that horse accident as business as usual -- and we'd be stuck with four more years of this inhumane industry.

But we won! We defeated Quinn – and we’ve never been closer to ending the abusive carriage horse industry in NYC. Give $5 or more to help us build off that amazing win!

Both Mayoral candidates, Bill de Blasio and Joe Lhota, have pledged to ban horse carriages, find new jobs for the drivers and retire the horses to sanctuary.

Here's the wake up call: Defeating Quinn was only part of the puzzle. Whoever wins the Mayoral election will need a humane City Council to back them up on humane legislation like stopping horse carriages and animal shelter reform.  We need to raise $5,000 by October 16th to fund our efforts to elect humane City Council Members and ensure that animals have a paw at the table in City Hall.

Let's win this thing. NYC's animals are counting on us.