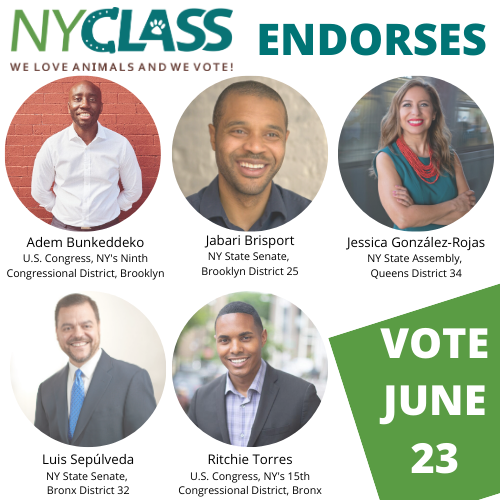 Today, NYCLASS announced a list of five endorsements for Congress, New York State Senate, and Assembly for the June 23rd Primary Election and we are proud to share these extraordinary candidates with you! We urge you to support them and vote for them, because you care about animal rights and so do they. Thorough candidate questionnaires with 13 in-depth questions about critically important animal rights issues and legislation in New York were sent out to each candidate and their answers were carefully evaluated before an endorsement was given. NYCLASS has chosen to endorse:

We encourage our more than 100,000 passionate supporters who live in these districts to vote, urge their friends and family to vote, and volunteer for these pro-animal candidates leading up to the election. Each of these candidates has pledged to support NYCLASS's priority animal protection issues and make New York a leader for animal rights.

"New Yorkers love animals and they vote. NYCLASS proudly supports candidates who champion animal rights legislation that protects all animals - from pets, to animals used for food and profit, to wildlife - and who will fight to end rampant carriage horse abuse in New York City," said Edita Birnkrant, Executive Director of NYCLASS. "We need elected officials at every level in New York to be working towards ending animal exploitation and cruelty as part of a progressive agenda committed to making our society more compassionate and just for all. NYCLASS strongly believes that all injustices towards oppressed groups are interconnected and must be challenged and we believe these five candidates are the kind of elected officials we need to fight those battles."

Said City Council Member Ritchie Torres, candidate for U.S. Congress in NY's 15th Congressional District, “In the Council, I’ve supported animal rights legislation to ban the sale of fur, ban horse carriages, and ban foie gras from restaurants. Animals deserve to be treated humanely and our laws must support that. I’m honored to receive NYCLASS’s endorsement in this race and look forward to being an ally to our furry friends on federal legislation and in Congress.

Said Adem Bunkeddeko, candidate for U.S. Congress in NY's 9th Congressional District, "I am proud to have the support of NYCLASS. They have been at the forefront of fighting for animal rights in New York and understand that the fight for social justice includes fighting for animal rights. For too long, our elected representatives have not given voice to animal abuses in Washington, and I look forward to working with NYCLASS as we take this fight to the federal level."

Said Jabari Brisport, candidate for NY’s 25th State Senate District, "I'm thrilled to receive the endorsement of NYCLASS. As a vegan of eight years and an animal rights activist, I'm ready to go to Albany and get to work for the animals. But also, as a queer black man in America, I understand the interconnectedness of all struggles. I see how important it is for the most marginalized in our society to access healthcare, housing, and education. I'm gonna be fighting for a better NY for all of us. Suffering is suffering and we must end it."

Said Jessica González-Rojas, candidate for NY’s 34th State Assembly District, "I am thrilled to receive NYCLASS's endorsement. I look forward to working alongside animal rights advocates to work towards a future where animals are not tortured for entertainment or fashion. As an Assembly Member, I will fight for the humane treatment and safety of all animals."

Said State Senator Luis Sepúlveda, running for re-election in NY’s 32nd State Senate District, "Thank you, NYCLASS, for your endorsement. The fight for environmental justice and a more humane society includes animal welfare and public health. In light of the current pandemic it is even more important to ensure safety and sanitary conditions for animals. I look forward to working together in NYS."

✔ All New Yorkers are eligible to vote by absentee ballot in this election due to COVID-19 concerns by indicating “temporary illness” as reason to request on your ballot application.
✔ You must postmark, apply online, email or fax your completed absentee ballot application by June 16. You can also apply in person at your local BOE office by June 23.
✔ Early Voting for June Primary Elections will take place June 13-21. Polling places will be open on Election Day, June 23, from 6:00 AM to 9:00 PM. Find your poll site here: https://nyc.pollsitelocator.com/search
✔ June 23 is the last date to postmark your absentee ballot. It is also the last day to deliver your absentee ballot in person at your local BOE office.
✔ Questions? Call 1-866-VOTE-NYC

Visit this link for more information