We've reached a major turning point in our efforts to revamp the City's animal shelter system.

Q&A: Should We Keep Horse-Drawn Carriages in New York City? 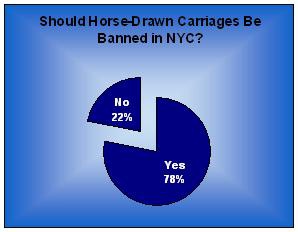 Dr. Brendan Furlong is a respected equine veterinarian and the vet for the U.S. Olympic Eventing teams since 1996. He is the owner of B.W Furlong & Associates, one of the premier equine sport horse practices on the East Coast and is considered to be an expert on lameness in horses.

The carriage horses lining West 59th Street at the foot of Central Park cannot be happy. Although the horse-drawn Hansom cab, designed by English architect Joseph Hansom in 1834, has been a New York City fixture since the Hansom Cab Company was started in 1869, today it is outmoded. The poor steeds pulling these and other buggies around Central Park have caught the eye of animal rights groups who allege mistreatment, and one group, NYCLASS (New Yorkers for Clean, Livable & Safe Streets), founded three years ago by Stephen W. Nislick, wants to replace carriage horses with clean hybrid, customized retro-looking vehicles. By introducing "green" cars, NYCLASS is banking that social entrepreneurship and good design will trump a timeworn tradition and provide a humane alternative.

I used to go horseback riding and still love watching these majestic animals, but not in a bustling city (or even a bucolic park in the heart of a bustling city). Vintage autos - even faux versions - are much kinder on the eye and conscience, and can provide a similar experience. This is not, however, just an animal rights issue, it is a design problem: How can a city as design conscious as New York retain a timeworn tourist attraction without descending to Disney-level kitsch?

These new/old replica horseless carriges could be an answer. The idea is to have a fleet 68 of "Eco-Carriage" cars, including five different models in five different colors from 1930s to 1950s. They may even appeal to even jaded native New Yorkers from time to time.

One of the potential manufacturers, The Creative Workshop in Ft. Lauderdale, Florida founded by Jason Wemig, is currently producing vehicles from scratch, restoring and customizing "some of the most rare and exotic cars in the world," states a report showing possible styles. And frankly, who wouldn't prefer to drive around the park in style - or as though on a movie set. Of course there are "traffic and safety" and "feasibility and economics" concerns, and NYCLASS commissioned studies on both. Not surprisingly, Nislick, CEO of Edison Properties LLC, a real estate and development company in Newark, who is cooperating with the ASPCA, says the carriage horse industry "is not convinced that the replica cars will be successful."

Citing existing hazards with traffic and pedestrians, and horses involved in reported accidents, Nislick says that the cars would improve conditions on the streets. And having watched the film "Blinders" about the accidents caused by carriage horses, I believe him.

Design plays a significant role in appealing to the the New Yorker's sense of place. Although contrary to all the teachings of Modernism about timelessness, Manhattan is a historic place, and Central Park, which never changes (except for the seasons, of course), is the core the ole New York's legacy. Populating it with faux and retro-fitted automobiles may not advance the cause of contemporary design - which is embodied in current architectural trends - but it doesn't detract either. Instead, it simply substitutes a more eye-catching form of design for a total cliché. What's more, the "nostalgic value" is a draw for more than 80 percent of the people who were surveyed. Eco-friendliness is another factor, though statistically far below the former. Only four percent in the survey cited humane treatment of horses to be a concern.

Substituting vintage rides for sort-of picturesque carriages will be a change in Park culture, but it will not detract from the quality of the tourist or native experience. And over time, it will be accepted as the standard. Wouldn't it be great to see those classic cars skirting around the park as though they had never faded from view.

In her former life, Chance worked nine hours a day wedged between the shafts of a horse carriage and wearing blinders.

For a Former Carriage Horse, a Grassy Sanctuary

What happens to the city’s carriage horses after they retire from clopping along the streets has long been a subject of mystery and contention.

At Long Last, Stables Are Empty

After a fruitless campaign to stay put, Shamrock Stables shut its doors Monday morning as the final horse carriage rolled out onto West 45th Street, leaving behind the odds and ends of a family-owned business that was once a major part of New York City’s carriage-horse industry: bales of hay, untended manure, an old trunk filled with horseshoes and a pair of boots.

A recent bill passed by the City Council (Intro 35) granting 5 weeks vacation to NYC carriage horses received a great deal of attention in the press, with news anchors chuckling over such an extravagant benefit. It's easy to see why your average overworked New Yorker would feel a touch of envy, but the harsh reality of life for a carriage horse working in New York City is no laughing matter.