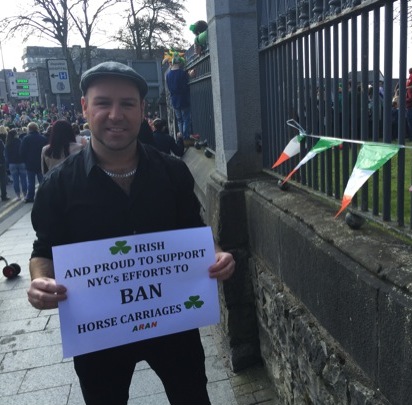 "Today, the Irish come out in force to celebrate the heritage and culture of Ireland. Not only does the beautiful island of Ireland turn green, but countries all over the world get in on the celebrations, and across New York the city literally turns into a small Ireland for the festivities.

Here in the republic of Ireland, compassionate Irish people are watching, and waiting, for the ban to take the horses who have worked so hard off the fume filled and congested streets of beautiful New York City. Over 10,000 members and supporters of Ireland’s national animal protection group, Animal Rights Action Network (ARAN); are supporting the mighty progressive efforts of the brave and compassionate Mayor Bill de Blasio to retire these poor animals to responsible sanctuaries and so that we can work to ensure the carriage drives are given adequate support to find good jobs. New York being one of the most beautiful cities in the world can do better than horse carriages, and the ban is certainly not before its time – so lets do!

To the campaigners at NYCLASS and elsewhere, we send you nothing but the good luck of the Irish."