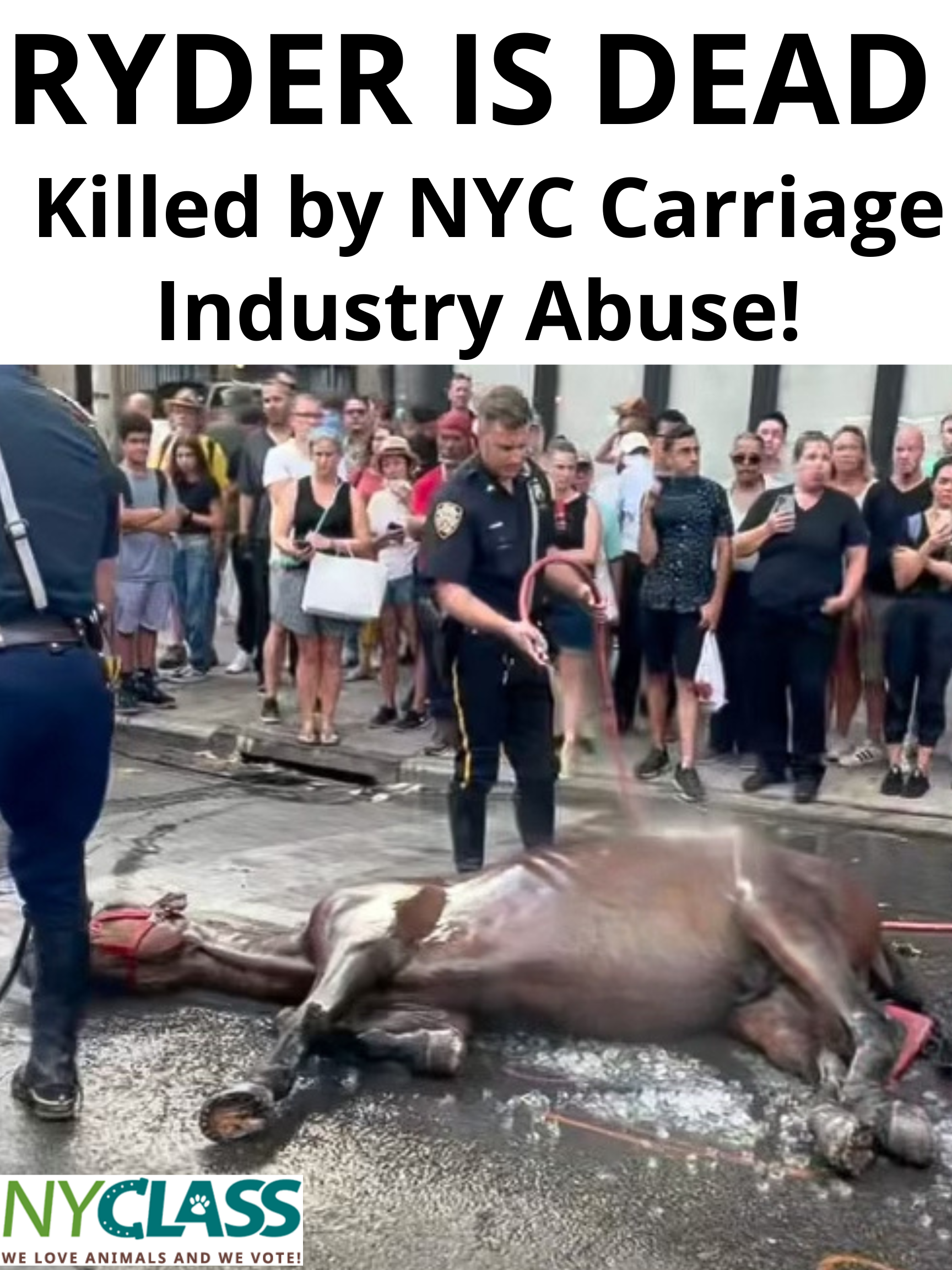 NYCLASS: Honor Ryder’s Memory By Passing #573 to End Carriage Horse Abuse For All The Other Ryders in NYC


NEW YORK – NYCLASS released the following statement in response to the death of Ryder, the sick, elderly carriage horse who collapsed on a Manhattan street in August and gained global attention after viral videos captured carriage owner and industry leader Ian McKeever whipping the animal while he was on the hot pavement. McKeever is currently under investigation by the Manhattan District Attorney’s office for animal abuse and the Department of Health recently charged his brother and fellow carriage owner Colm McKeever for falsifying the horse’s veterinary records with forged documents that changed Ryder’s age from 26 to 13 years old. According to sources, Ryder’s body has been transferred to Cornell University for a necropsy to determine the cause of his death.

“We are devastated to learn that Ryder has died. His horrific collapse, after years of abuse, inspired tens of thousands of people from across the globe to stand up to carriage horse industry cruelty. But make no mistake: this tragedy was not caused by an act of God – Ryder's death was the result of savage cruelty and greed. To make a profit, the horse carriage industry would have literally worked Ryder to death if it weren't for viral videos and the people who exposed their endless lies and cover ups. Their mistreatment of Ryder is the reason he is dead two months later,” said Edita Birnkrant, Executive Director of NYCLASS. “This is not over. There’s an ongoing criminal animal abuse case pending against Ian Mckeever, who whipped Ryder after he collapsed onto the scorching pavement once his body finally gave out after months of criminal neglect. Let's honor Ryder's memory and protect all the other Ryders still suffering in New York City by passing Intro #573 in the NYC Council to end carriage horse abuse once and for all.”

TAKE ACTION TO END CARRIAGE HORSE ABUSE WITH ONE CALL/EMAIL
A new City Council bill sponsored by Councilmember Robert Holden, will replace horse carriages with modern electric carriages. In addition to reducing horse deaths and making Manhattan streets safer for everyone, the legislation will also provide better jobs for drivers.

New Yorkers: FIND YOUR NYC COUNCIL MEMBER HERE TO make one quick call/email, to ask them to "Sign on as a co-sponsor to Intro 573 to replace suffering, dying carriage horses with cruelty-free electric carriages." Make sure you tell them that you live in their district!

If you do not live in NYC, please call NYC Council Speaker Adrienne Adams at 718-206-2068 and 212-788-7210 or email at [email protected] and ask her to "Use her power as head of the NYC Council to "END horse abuse by advancing and passing Intro 573 to replace deadly, unsafe horse carriages with cruelty-free electric carriages"

Additional talking points for City Council: "When horses are forced to pull carriages on the busy streets of Manhattan, violent crashes and horse deaths will keep happening over and over again. Electric carriages don’t get spooked or drop dead- but 2,000 pound terrified horses in cities do - endangering themselves, carriage drivers, and everyone else around them. Ryder's long-term neglect and abuse leading to his collapse August 10 is another wake up call for the City Council and Mayor to end this madness and bring New York in line with other global cities by shifting to abuse-free, electric-powered alternatives that ensure safer streets and provide drivers with better paying jobs." This is long, long overdue. Help us make history in 2022

Background: Here are some of the false claims made by horse owner representatives like Christina Hansen and TWU Local 100:

FACT: According to an independent veterinary review,“there is no evidence” Ryder has clinical Equine Protozoal Myelitis (EPM), directly contradicting the false information repeatedly cited by horse carriage owner representatives like Christina Hansen and TWU as the cause of the horse’s collapse into traffic. In his review, Dr. Jim Keen stated that Ryder’s low antibody levels and lack of any visible symptoms of the illness “preclude clinical EPM disease.” Rather, Dr. Keen noted that the records show symptoms consistent with chronic malnutrition or even starvation. A recent examination by Cornell University veterinarians indicated Ryder likely was suffering from cancer.

FACT: Owner Ian McKeever falsely claimed to NYPD officers that Ryder was 13 years old, and his brother and fellow carriage owner Colm McKeever falsified veterinary records by changing Ryder’s age from 26 to 13 in forged documents submitted to the Dept of Health: From the NYPD report: “The collapsed horse was identified by its owner operator, Mr. Ian McKeever...as ‘Ryder’ a 13-year-old gelded Standardbred.” An industry veterinarian directly contradicted the abusive driver’s false claim in the same police report, the doctor “determined that the horse was 28-30 years old rather than the aforementioned 13 years old. Ryder also had a freeze brand tattoo on his neck which revealed his correct age in an online database of former harness racing horses.

According to DoH documents:


FACT: For weeks, horse owner representatives repeated the false claim that Ryder e was 14-years-old. In dozens of news stories, horse owner spokespeople Christina Hansen and Pete Donohue have stated that Ryder was 14 years old. From aTWU press release issued on the day of the collapse: “Ryder is alert and resting comfortably at his stable. The 14-year-old Standardbred was heading back to his stable…” For weeks, Hansen and Donohue cited the veterinarian’s review without mentioning the age discrepancy or his diagnosis of malnourishment.

FACT: Veterinarian reported to NYPD that Ryder was “underweight” and “malnourished” on August 10th. Hansen claimed Ryder was healthy and in “good condition” before he collapsed on 9th Avenue. However, an industry vet reported to NYPD on the day of the collapse that Ryder was underweight and “malnourished,” which means the horse had “been denied adequate food and water for a very long time.” It could also mean that he is too sick or old to put on weight and may be suffering from other serious underlying health conditions. The vet also said Ryder should not have been working that day, contradicting Hansen’s rosy narrative.

FACT: Witnesses confirmed Ryder was not in “good condition” before he collapsed on the street. Ryder was "in distress"and "having trouble walking" in Central Park four hours before the horse collapsed, according to eyewitnesses with time-stamped photos. The struggling horse was also subjected to verbal and physical rage from driver Ian McKeever, who was captured on video slapping and whipping the horse with his reins before and after the collapse. An industry vet said Ryder should not have been working. Despite this, Hansen claimed “Ryder had been seen in good condition in Central Park” that day “by other union members.”

FACT: Despite claiming to be a “truth-telling pony soldier,” Christina Hansen apparently cannot tell the difference between a 14-year-old horse and a 26-year-old horse – or she’s covering up for abuse and neglect. When confronted with a police report quoting her veterinarian saying Ryder was 28-30 years old, Hansen feigned shock and claimed the the horse’s owner was “surprised” when he learned Ryder’s real age, “which she said had been misrepresented by a previous owner as 14 years old and miscalculated by a veterinarian who examined him in April in order to register him as a carriage horse.” However, the police report shows a veterinarian identified Ryder’s age as 28-30 on August 10, while Hansen and others continued for weeks to falsely claim Ryder was 14 years old. Ryder also had a very visible freeze-brand tattoo on his neck which listed his real age in a database. Further, it is not credible that a person who claims to be a horse expert could not tell the difference between a 14 year old horse and a 26-30 year old horse.

Horse owner rep Pete Donohue said on August 12, "Every expert who's looked at this has concluded that these horses are well cared for, are treated humanely and are in good health and get excellent care." In addition to independent veterinarians who viewed the incident, the industry vet reported that “there are some [carriage horses] that are not well taken care of. And that's what happened. It's weak, underweight, with no muscle, with no pull, no energy. Well, of course it's gonna collapse on the street.” So why was this allowed to happen? And what about the other horses that are not being “well taken care of”? The veterinarian has a duty to report these cases.

FACT: Neurological disease EPM cannot be diagnosed without blood tests, while owner reps announced an instant diagnosis the day Ryder collapsed. On the day of the crash, horse owner rep Pete Donohue claimed Ryder collapsed from EPM. According to TWU Local 100, “The diagnosis of the equine veterinarian who examined Ryder is that he has EPM - a neurological disease caused by possum droppings. Please do not jump to conclusions before knowing the facts or talking to the carriage drivers’ union.” According to Cornell University, this immediate diagnosis is not credible: the “standard of practice for diagnosis is to perform a complete neurological exam, accompanied by laboratory tests that detect an immunological response to infection.” This includes blood tests and a spinal tap, which do not produce instant results. No results showing the horse’s condition have been released.


FACT: Whipping collapsed horses is NOT part of Department of Health training.

Hansen said that whipping or flogging a collapsed horse is a standard practice, and that the driver was simply “following rules laid out by the city’s Department of Health for what to do in such circumstances.” Hansen said the driver was “merely following city Health Department protocol at the time.” "He didn't beat the horse," Hansen insisted. The City debunked this lie and explicitly noted that “whipping or flogging horses” are NOT part of the city’s carriage driver training practices.


FACT: Hansen minimized, defended longtime horse owner and driver Ian McKeever’s abuse. “As for McKeever, Hansen said that while he was riding with Ryder that day, he did not own the horse or the carriage, as he was working as a fill-in driver that day. Hansen said McKeever had been riding for 35 years, but Wednesday was the first time he'd done so since before the pandemic. Nevertheless, he told her he was still shaken up by last week's incident in Manhattan. 'It's rough for him. He was there by himself,' Hansen said. She added, 'He said, 'Listen I panicked. I tried to get the horse up, and when I tried to get the horse up, all of a sudden there was an angry mob.'"
Do you like this post?