NEW YORK — A trove of Department of Health documents obtained by NYCLASS revealed that the veterinary records for fallen carriage horse Ryder were unlawfully falsified and submitted to the agency by his former owner Colm McKeever, brother of disgraced carriage horse driver Ian Mckeever, who is currently under a criminal animal cruelty investigation by the Manhattan District Attorney. McKeever falsified Ryder’s age from 26 to 13 on records filed with the City, and tomorrow, he is facing an administrative hearing related to his misconduct.

The documents reveal that the Department of Health conducted an investigation into the age discrepancy of Ryder after he collapsed, and it was revealed that he was much older than the age his owners stated. The agency concluded that Colm McKeever had falsified the veterinary records to change the birthdate originally posted by veterinarian Dennis Farrell to be 1999, when in fact, Ryder was 26 years old, as verified by the freeze brand tattoo on his neck. The lies about Ryder’s age were repeated by carriage horse owner representatives including Christina Hansen and TWU, Local 100.

According to DoH documents:

“Respondent [McKeever], made false and misleading statements, or presented forged documents, reproductions and alterations in that on April 26, 2022, the respondent failed to comply with the New York City Health Code §3.19(a) by submitting to the Department a Rental Horse Certificate of Health form for a horse named Ryder which included a false date of birth of (01/01/2009) instead of the birth year of 1999 as noted in Ryder’s Rabies Vaccination Certificate and in an invoice for Ryder by the examining veterinarian, Dennis M. Farrell. A Rental Horse Certificate of Health form is required to be submitted to the Department in order to receive a license to use a horse in a Rental Horse Business.”

This new information about Ryder’s falsified veterinary records will be presented to the District Attorney’s Office, and NYCLASS urges criminal charges to be filed against Colm McKeever, in addition to Ian McKeever, if state laws have been violated. This latest evidence of lawbreaking only further exposes the carriage horse industry’s widespread corruption. Colm and Ian McKeever are not only longtime carriage horse owners, they are leaders of this industry.

Edita Birnkrant, Executive Director of NYCLASS said: “While it is absolutely disgraceful to learn that longtime owners and leaders in the carriage industry have falsified veterinary records in order to unlawfully force an elderly, sick horse to work to death, we are not surprised one bit. The neglect, cruelty and abuse is systematic and has been going on for years - NYCLASS has been documenting and reporting it all along. Fortunately, there’s a ready-made solution to the shameful abuse of New York’s carriage horses: the City Council must pass Intro #573 to replace horse carriages with cruelty-free, eco-friendly, electric carriages that would provide better pay and benefits for carriage drivers, with none of the abuse. Fully 71% of New Yorkers agree that it is time to remove horse-drawn carriages from City streets.” 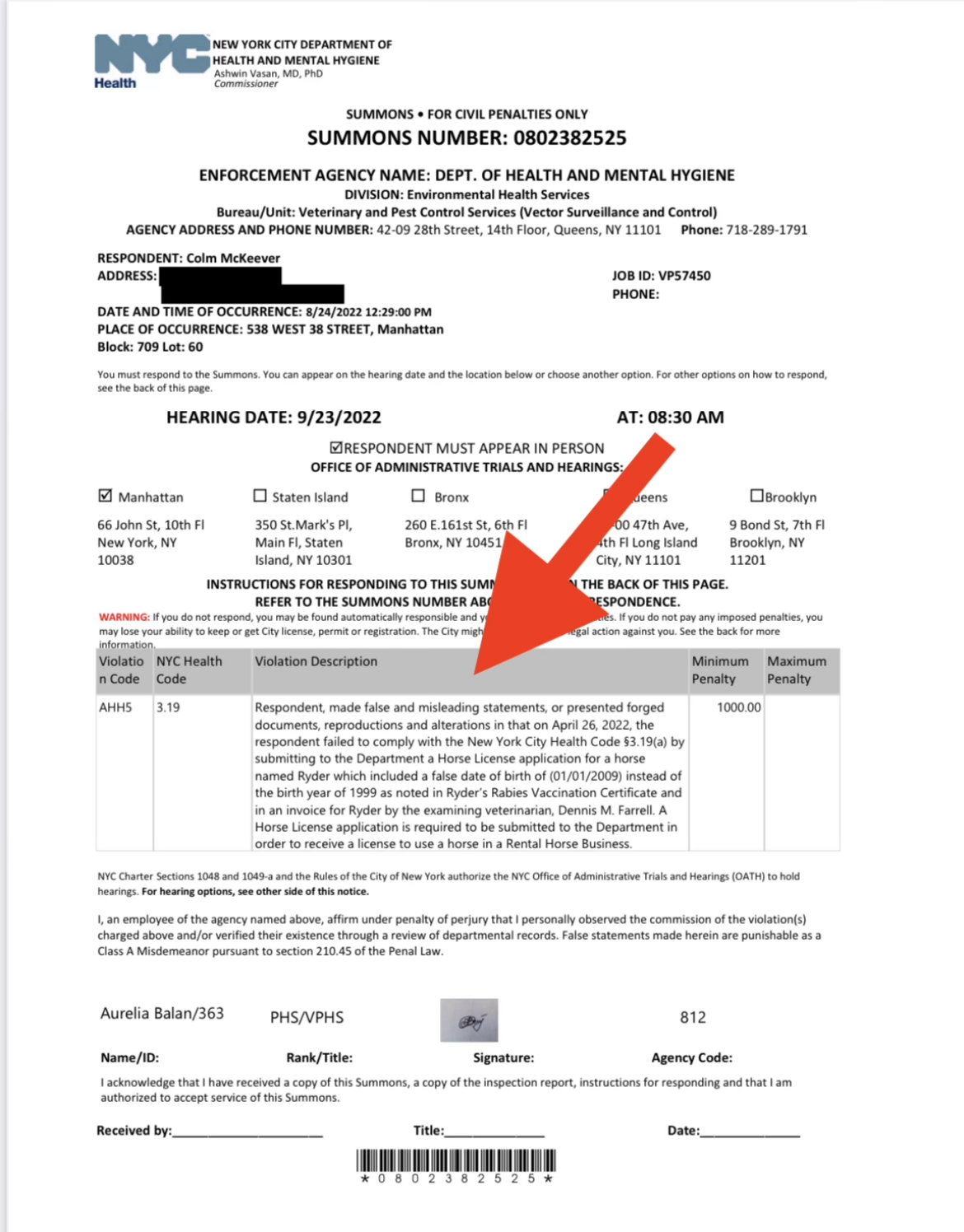 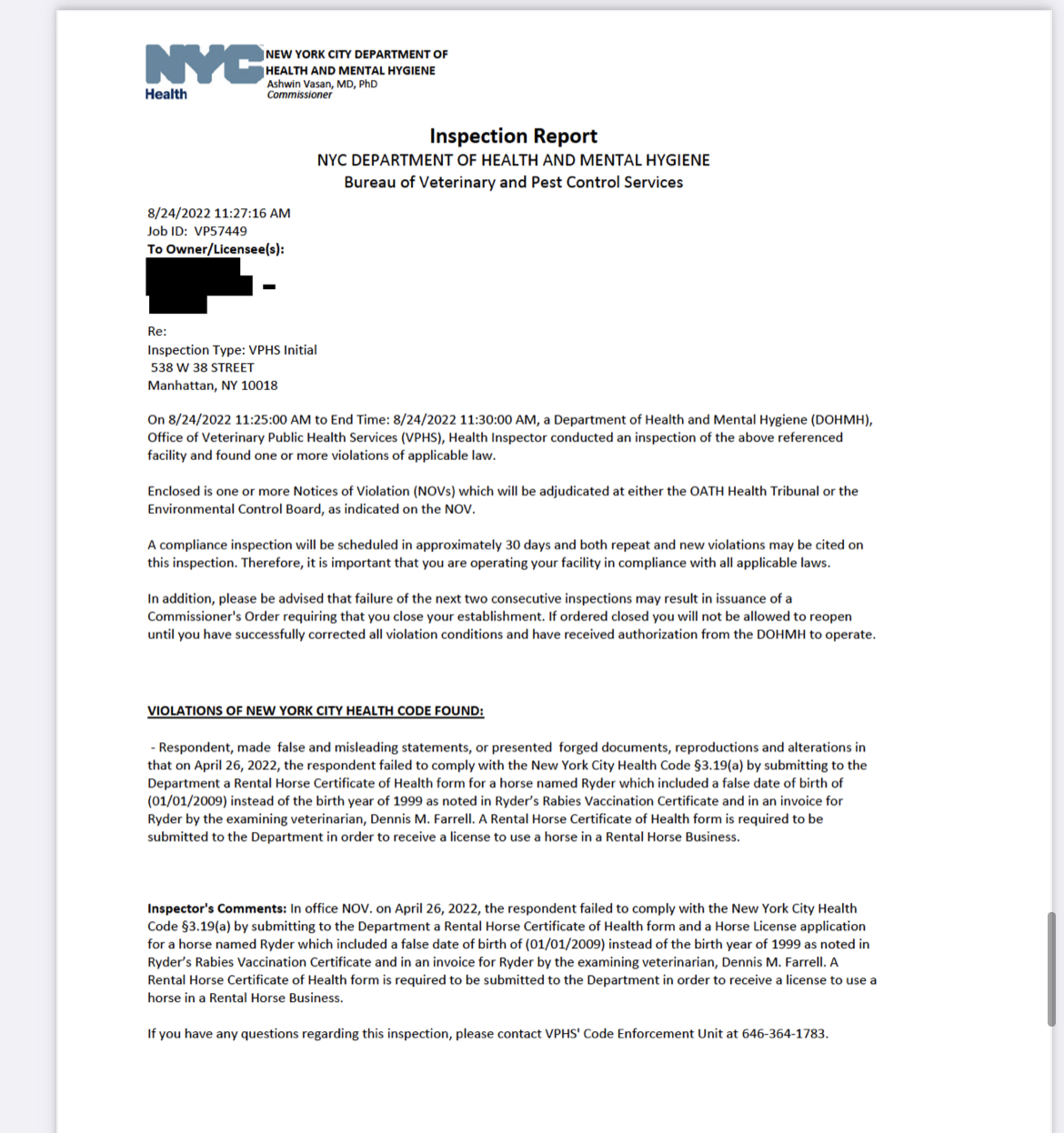