The horse crashed into a wall and the couple fell out, but Oreo kept on galloping until it ran into a town car.

Huffington Post
17 August 2012
The horse crashed into a wall and the couple fell out, but Oreo kept on galloping until it ran into a town car.

FDNY confirmed on Thursday a carriage horse near Columbus Circle ran away and collided with a car.

The accident occurred at the corner of Ninth Avenue and West 57th Street.

The New York Post reports the horse named Oreo became frightened by a car noise when it suddenly broke free and ran away with a couple in the carriage.

The horse crashed into a wall and the couple fell out, but Oreo kept on galloping until it ran into a town car. The driver and couple were taken to a hospital. A stable manager tells The Post the horse is "doing fine."

A woman who witnessed the accident told NBC New York, "Apparently it struck a car here, and then it separated [from the carriage].The horse continued up Broadway, just galloping." She added that there were two people in the carriage at the time of the accident. One man was taken away in a stretcher but did not appear to be seriously hurt. 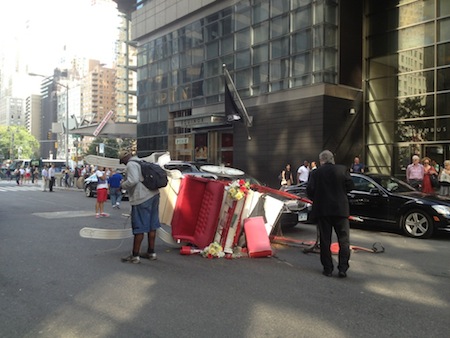 The horse-drawn carriage industry has drawn heavy criticism from animal advocates who demand New York City follow in the footsteps of other global cities including London, Paris, and Toronto by banning the controversial tourist attraction.

As shocking as runaway horses in the middle of the city may be, unfortunately, such instances have happened before.

In the past few years, several carriage horses have collapsed and died while working, triggering activists to take a stand. After a white equine collapsed in Midtown in 2011, the ASPCA released the following statement:

We at the ASPCA express our sadness and concern at this tragic incident. The life of a carriage horse on New York City streets is extremely difficult and life threatening, and the ASPCA has long believed that carriage horses were never meant to live and work in today’s urban setting.

Despite the increased momentum calling for a ban, Mayor Bloomberg and City Council Speaker Quinn have continued to voice support for the industry citing its economic benefits.

But in July, a carriage driver drew ire from the LGBT community, including Quinn, after a disturbing video surfaced showing the driver spewing a homophobic, racist rant.

The video prompted Quinn to condemn the driver's tirade, deeming it "reprehensible and unacceptable." However, Quinn was sure to also express her support for the industry it was economically vital for the city to be "allowing an industry that generates vital jobs and tourism for our city to continue."

Correction: A previous version of this article misstated the streets at which the accident occurred.