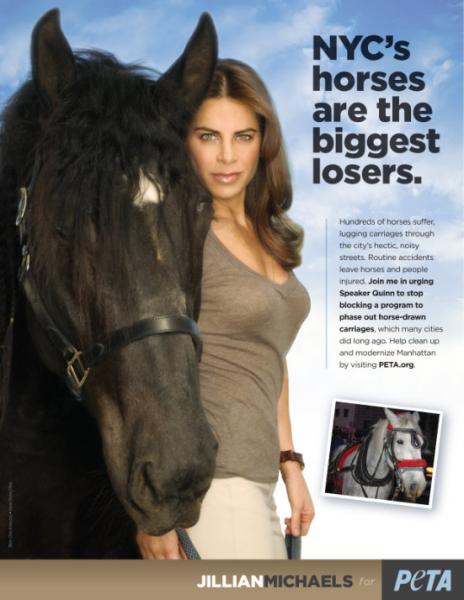 “NYC's horses are the biggest losers” when it comes to the carriages, says a People for the Ethical Treatment of Animals ad set to appear across Manhattan and online.

The ad features Michaels posing alongside a horse with accompanying text that the animals suffer in their work and that “routine accidents” leave both equines and humans injured.

“Join me in urging Speaker Quinn to stop blocking a program to phase out horse-drawn carriages, which many cities did long ago,” Michaels urges in the appeal.

PETA will spend about $15,000 to plaster posters around Manhattan -- primarily in Quinn's Council district -- starting next week. Online versions will also hit news sites and web pages that cater to a gay audience as soon as Friday, a PETA spokesman said.

The PETA campaign makes no reference to Quinn’s status as a contender in the Sept. 10 Democratic mayoral primary.

But the slam from Michaels -- who, like the council speaker, is an out lesbian -- is another blow in a contest during which Quinn has been pummelled by negative ads funded in part by NYCLASS, which opposes the carriages.

Quinn campaign spokesman Mike Morey said the horse-carriage industry “is extremely well regulated, in large part due to the work of Chris Quinn. She doesn't support shutting down an industry that employs hundreds of New Yorkers."