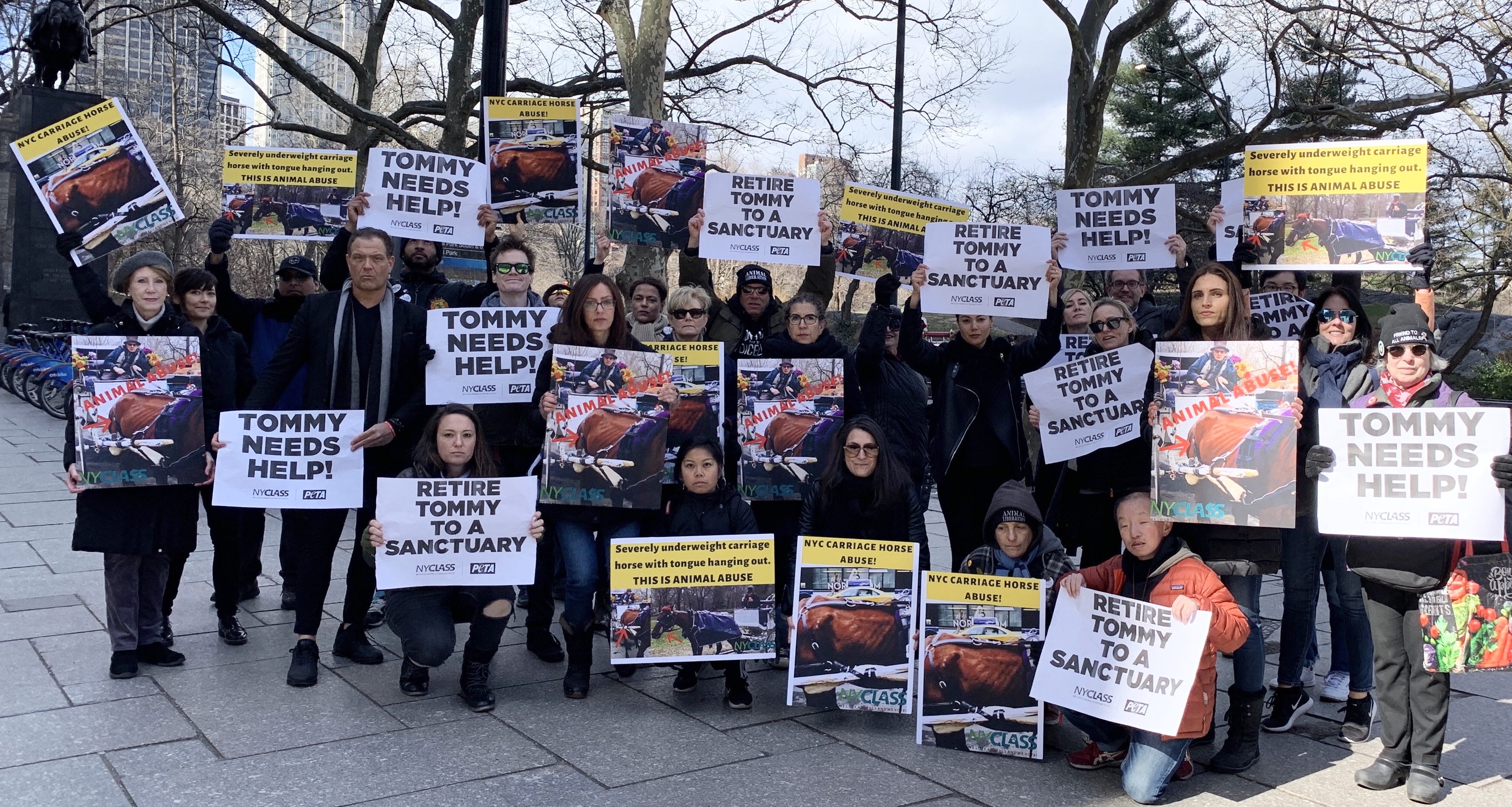 On February 27 NYCLASS held a large EMERGENCY RALLY at Central Park to protest and expose the horrific condition of a carriage horse named Tommy.   This month we documented video and photo evidence of Tommy's ribs shockingly visible and his tongue hanging far out of his mouth, flopping from top to bottom as he pulled a carriage.  Tommy’s condition is completely unacceptable, and he needs to be pulled from the streets immediately. Expert veterinarians who viewed our footage agreed.
As multiple veterinarians have noted from the video evidence, he is underweight and likely has significant health problems beyond what we can merely see. It’s bad enough when healthy horses are forced to work in dangerous, inhumane conditions day in, day out, but when a clearly unhealthy horse like Tommy is forced to pound the pavement 9+ hourse a day strapped to a heavy carriage, we must demand action.
Tommy's tragic example shows exactly why we need new concrete laws in New York codifying a far stronger standard of care for these horses, in addition to dashcams on the carriages themselves so the City can better monitor their condition,and an official retirement policy for carriage horses so they are no longer sent to slaughter.
Tommy is owned by Cornelius Byrne, who owns a NYC stable in addition to several other carriage horses and medallions. In 2007, Byrne was convicted of attempting to bribe a City official inspecting his stable, only to somehow get his license reinstated following a lawsuit. 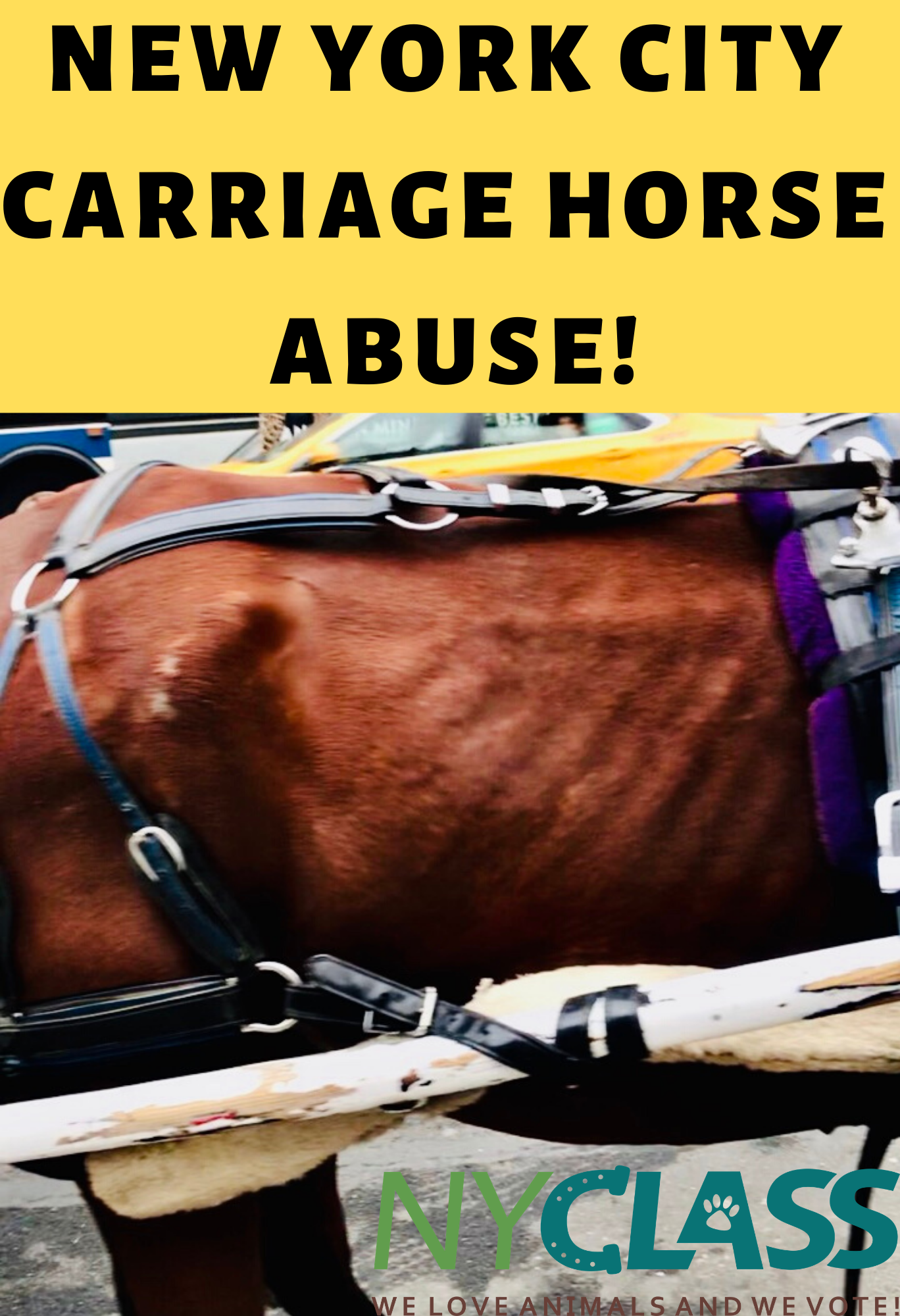 “I have been asked to review one still image and two videos of a carriage horse in New York City who is so underweight and undernourished as to qualify as an animal abuse case under New York’s Department of Agriculture, Article 26, section 350 (definition of cruelty) and section 353 (defining neglect and poor care).

I am a practicing veterinarian, having graduated from Cornell’s School of Veterinary Medicine in 1980 with a class rank of #1. I have won many awards for my work in combating animal abuse, including a citation from the New York State Police. I have had a lifetime of exposure to horses of many breeds and types of work, including driving and training carriage and draft horses. From 1988 to 2003, I inspected New York City’s carriage horses in their stables and at work, where many were affected by heat stress in the summer and many exhibited health concerns such as lameness and chronic obstructive pulmonary disease year-round.

The horse in this case, Tommy, is a bay saddle-horse type who exhibits the following deficiencies and signs of illness and poor care: 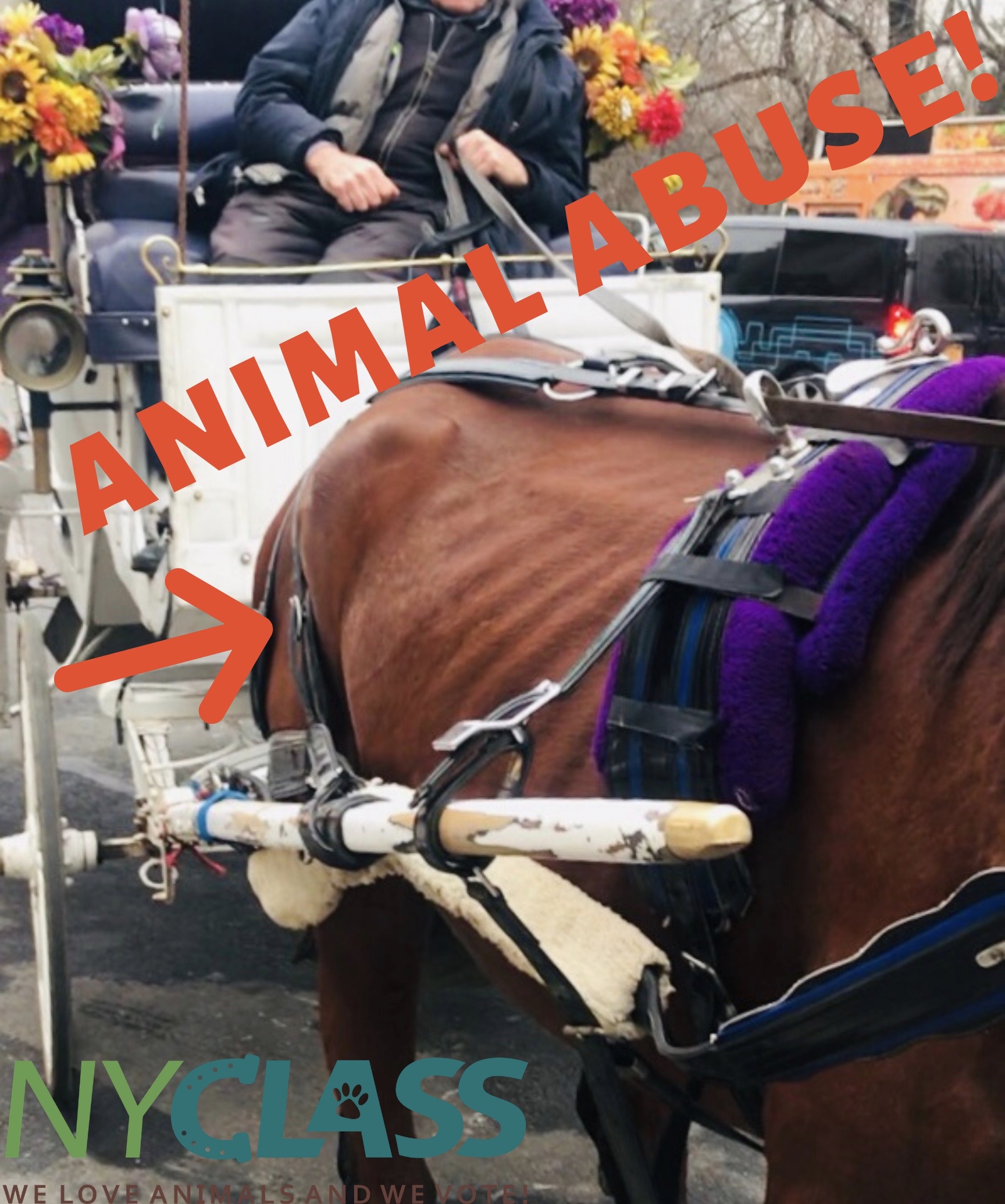 NYCLASS reported Tommy's shocking condition to the proper authorities as soon as we became aware of it. We are outraged that he has continued to be forced to pull a carriage by his owner and we won't stop fighting to SAVE TOMMY, and all other carriage horses suffering unebelievable abuse and cruelty right on NYC streets. Stay tuned for more updates on Tommy as we get more information.  We can only continue our work to end abuse and protect animals with your continued support!