NYCLASS NAMES FIRST SET OF ENDORSEMENTS IN THE BRONX

NYCLASS NAMES FIRST SET OF ENDORSEMENTS IN THE BRONX

“NYCLASS proudly endorses eight candidates for City Council in the Bronx,” Allie Feldman, Executive Director of NYCLASS said. “These candidates have pledged to stand by NYCLASS as we continue to urge the City to build shelters across the borough in order to protect the thousands of abandoned animals that roam the streets of New York. These animal heroes will fight to give the Bronx the animal shelter it deserves. Protecting New York City’s animals is our number one priority, and we look forward to working closely with these candidates once they are victorious on September 10 and in the General Election in November.”

These candidates also support NYCLASS' efforts for a pilot program to replace the abused NYC carriage horses with vintage electric cars, a ban on puppy bills, reforming Animal Care & Control and protecting a senior citizens' right to have a companion animal.

More endorsements to be revealed in the coming weeks. 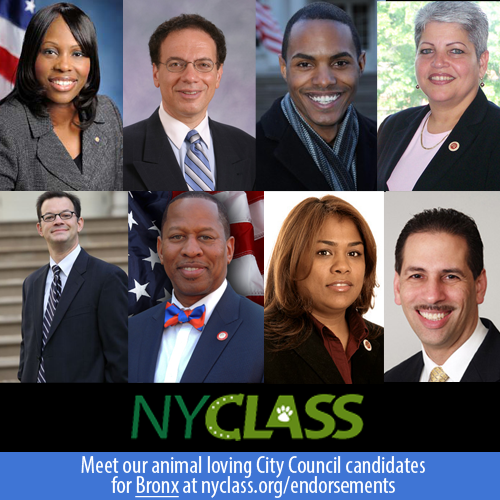