“NYCLASS proudly endorses eight candidates for City Council in Queens,” Allie Feldman, Executive Director of NYCLASS said. “These candidates have pledged their willingness to stand with NYCLASS as we promote the building of shelters to provide refuge for the abandoned animals wandering the streets of Queens. These paw protecting candidates will make sure Queens’ four legged constituents finally get the animal shelter they’re fighting for. We feel very strongly that stray animals should be given a home so that both they and New Yorkers are kept safe. Protecting New York City’s animals is our number one priority, and we look forward to working closely with these candidates throughout their campaigns and throughout their respective terms in the Council.”

Candidates were also selected based on their support of a pilot program to replace the abused carriage horses with vintage electric cars, requiring pet stores to install life-saving fire sprinklers, banning puppy mills and protecting a senior citizens' right to have a companion animal.

More endorsements to be revealed in the coming weeks. 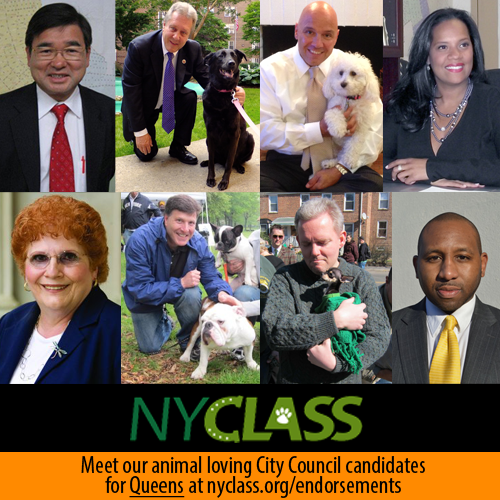