NYC horse carriage industry could be on its last legs 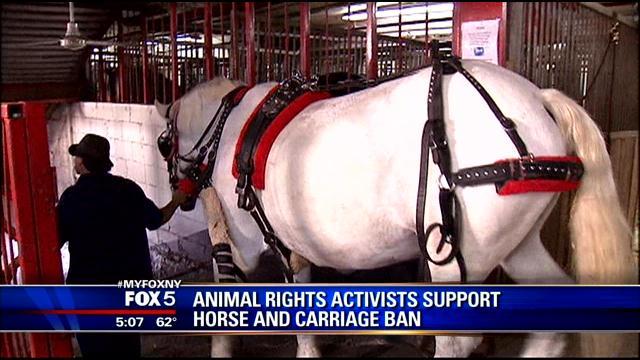 For 155 years there's has been a horse cab stand at 59th Street and Fifth Avenue. And the horse and carriage ride through Central Park has become an iconic tourist attraction of New York City.

But both major mayoral candidates have said they would get rid of the carriages if elected.

Supported by animal rights organizations, Bill de Blasio has said he would start the process as soon as he became mayor.

Driver Christine Hansen is more worried about losing her job than ever. She and 219 other drivers and 68 carriage medallion owners worry their livelihood will be gone.

But animal rights activists, supported by the ASPCA, say that New York City streets are no place for horses, especially the journey through traffic to and from stables a mile and a mile and a half away from Central Park.

NYClass says the stables where the horses are housed were and are in poor condition. NYClass pushed for new laws in 2010 governing the treatment of the horses. In the stables we saw horses were able to lie down, had plenty to eat and the owners say the horses get a required 5 weeks' vacation a year.

Stable owners believe the reason the carriage industry is being targeted is that real estate developers want the buildings to build condos.

The stables are located on the West Side on 52nd, 48th, 38th and 37th streets -- all prime areas especially with the Hudson Yards development and No. 7 train extension.

Key members of NYClass are in real estate, but there is no direct link to purchasing the stable buildings.

The mayoral candidates and NYClass support an ornate turn-of-the-century-looking horseless carriage to replace the horses and carriages to give drivers an opportunity to work.

Hanging over much of this issue is the prospect of the slaughter of horses.

Murphy, once a trotter race horse, was destined to a slaughterhouse and now works the streets. NYClass says it has offered to put him and all the horses to pasture.