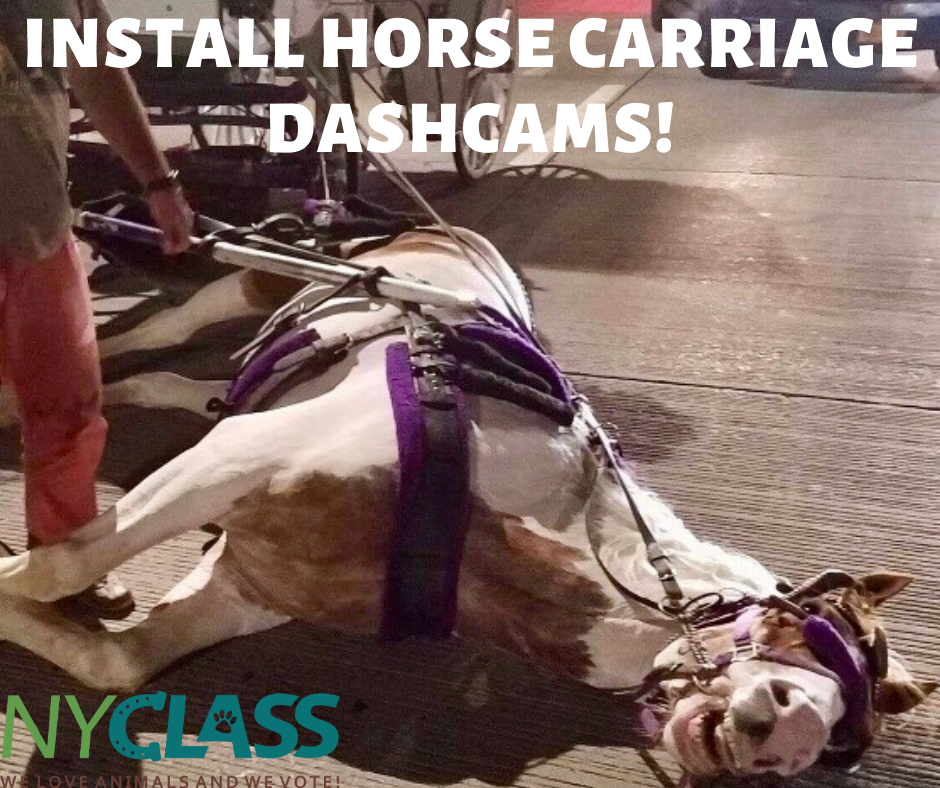 (One of many NYC carriage horse collapses with no documentation or video footage because of lack of carriage dashcams- this was Norman, a horse who collapsed in 2016. This photo was taken by a horrified New Yorker)

The Daily News published this article today  exposing what NYCLASS shockingly discovered last week - that a NYC carriage horse was electrocuted on West 48th Street and 11th Avenue on February 4th after stepping on an electrified plate on a rainy night while pulling a carriage. The horror didn't end there for the horse though.  In response to being electrocuted, the terrified horse galloped wildly down busy 11th Avenue with no driver in the carriage and then crashed into a pole and collapsed on the street, according to an eyewitness report. We are awaiting further updates on the condition and whereabouts of this horse, who we were told was being "treated for shock" last week.

In response to this latest tragic incident NYCLASS is calling on the City to mandate that all carriage horse drivers install dashcams on each carriage, in order to document horrific crashes and collapses, help protect the horses from being overworked and abused, and to help City agencies hold drivers accountable for the regular law-breaking that occurs with little consequences. We have even offered to pay for these dashcams because we believe they are critically important to end horse abuse. Please consider donating whatever you can now to help us achieve this goal!

New York’s carriage horses are often overworked, led into dangerous traffic conditions and even forced to make illegal pick-ups in chaotic  areas like Time Square, but the City has an incredibly difficult time enforcing these laws. There are many incidents of carriage horses collapsing, crashing into vehicles, spooking in traffic, escaping stables and galloping wildly down busy streets with no driver, but without video evidence of what occured, there can be no accountability or consequences and little way to follow up on the condition of the horse.

Requiring dashcams on carriages is a simple and cheap way we can harness technology to enforce the law and make sure carriage drivers aren’t overworking them or putting them in dangerous situations. As long as drivers are following the rules, this should be no problem for them to agree to just a little more transparency, and our organization is even willing to pay for them.

Dashcams are small, inexpensive cameras designed for vehicles that continuously record the view in front of a car, or in this case, a horse carriage. They are also able to automatically upload pictures and video using 4G to a cloud. Many taxis, Uber and Lyft drivers use the technology as a safety measure.

NYCLASS is now proposing that all horse carriages install a dashcam that uploads a real-time feed of what they record to the City. The technology would enable the NYPD, Department of Health and the Department of Consumer Affairs to better police violations of City law by carriage drivers who overwork horses, make illegal pick-ups and violate traffic laws such as running red lights. Dashcams would also enable the Department of Health to more easily monitor the welfare of horses and track that they’re not being overworked and would provide footage of exactly what occurred when horses crash, collapse or get electrocuted on City streets, as happened last week with no available footage.

We can only continue our critically important work to help protect carriage horses and end animal abuse with your continued support. Please consider donating any amount today to help fuel our fight for animal rights!