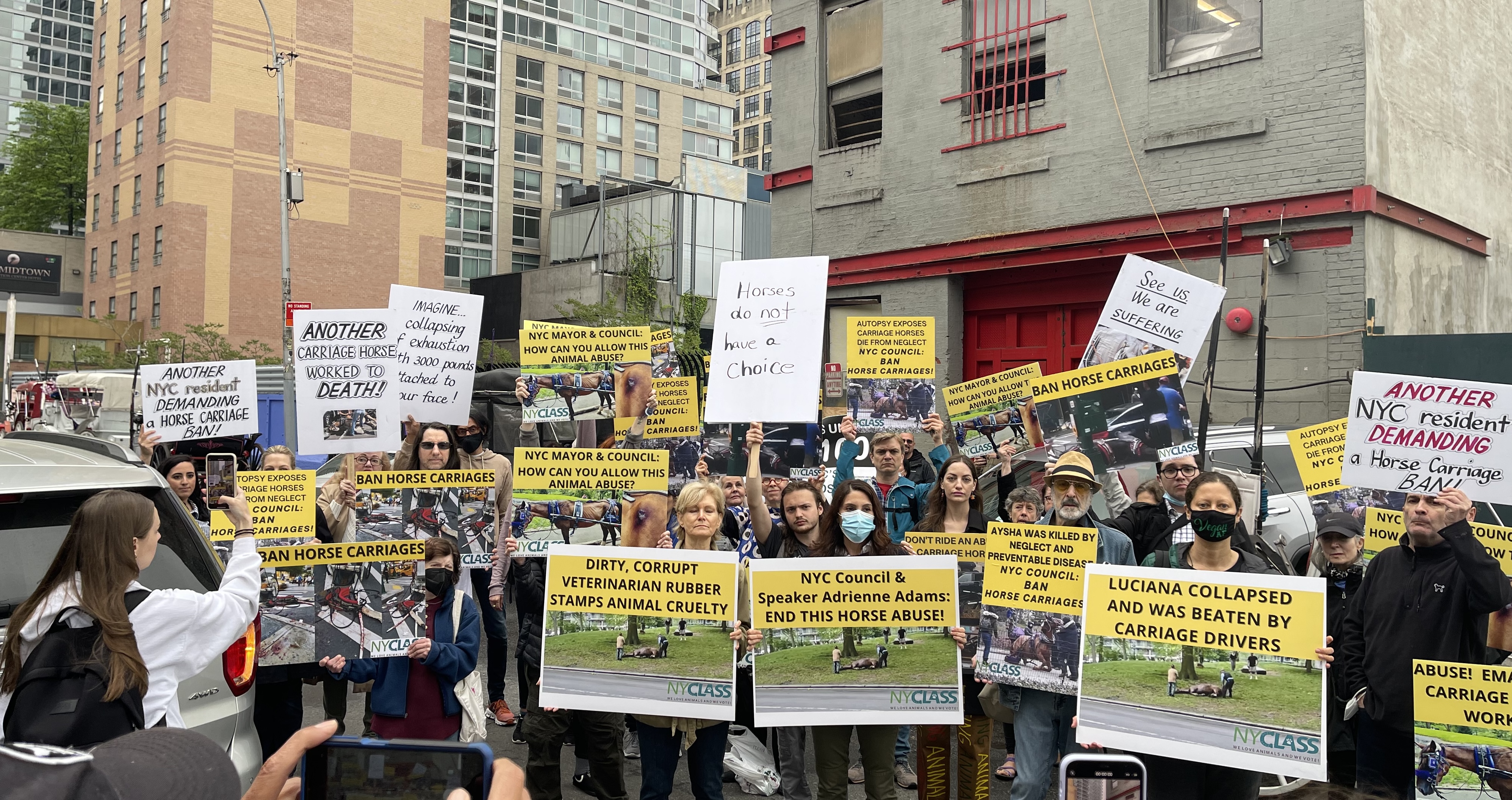 NYCLASS: Remove Carriage Horses From the Streets of NYC Without Delay

NEW YORK – At an emergency protest May 19, NYCLASS and PETA called on the New York City Council to take immediate action to end the mistreatment, neglect, and abuse of carriage horses after another horrific collapse in Central Park that was followed by abuse. The groups highlighted the disturbing record of a corrupt, industry-funded veterinarian, who the TWU claimed treated the fallen horse.   WATCH VIDEO EXPOSING CORRUPT VET HERE.

Video footage from a tourist shows that a carriage horse named Luciana on her first day pulling a carriage collapsed in Central Park on Saturday as two carriage drivers mistreated her and neglected to use proper protocol or equipment for helping a downed horse. The tourist who took the video footage was so traumatized by what she saw that she pledges to never return to New York again until horse carriages are prohibited from operating.

Luciana was screaming in pain and distress as carriage drivers kicked her and yanked her tail and face while she lay on the ground in agony after collapsing, witnesses reported to NYCLASS. People in the park screamed at the drivers to stop hurting her and some called 911. No veterinarian was called to the scene to treat this horse, who was having a medical emergency.

At the protest we exposed industry veterinarian Dr. Camilo Sierra’s long and disturbing history of unlawful and harmful behavior to horses at New York racetracks, which includes the falsifying of health reports and improperly drugging of horses.  Carriage horse representatives reported that Luciana was examined by Dr. Sierra, whose license has been suspended by the State and sanctioned at least seven times.

According to the State Gaming Commission, Dr. Sierra committed “an improper, corrupt and fraud act and practice in relation to racing, and committed and attempted to commit fraud.” The Commission also penalized Dr. Sierra on seven other occasions since 1993 for violating “various procedural, record-keeping, and medication-related rules at Aqueduct, Belmont Park, and Monticello Raceway.”

“Luciana was brand new to the city and should not be subjected to further danger and abuse. We call on her owners to release her to a sanctuary and we’ll offer support to make that happen,” said Edita Birnkrant, Executive Director of NYCLASS. “It’s clear the entire horse carriage industry is corrupt from top to bottom. Instead of relying on the word of shady vets or animal abuse apologists, it’s time for the City Council and Mayor to follow the example of other modern cities in the world - including Chicago and Melbourne, Australia - and remove horse carriages from the streets of New York without delay.”

We urgently need you to make one quick call (or email) to your NYC Council Member, urging them to support legislative efforts to get suffering carriage horses permanently OFF the streets. Make sure you tell them that you live in their district!

If you do not live in NYC, please call NYC Council Speaker Adrienne Adams at 718-206-2068 and ask her to use her power as head of the Council to END this abuse and get the horses off the streets! 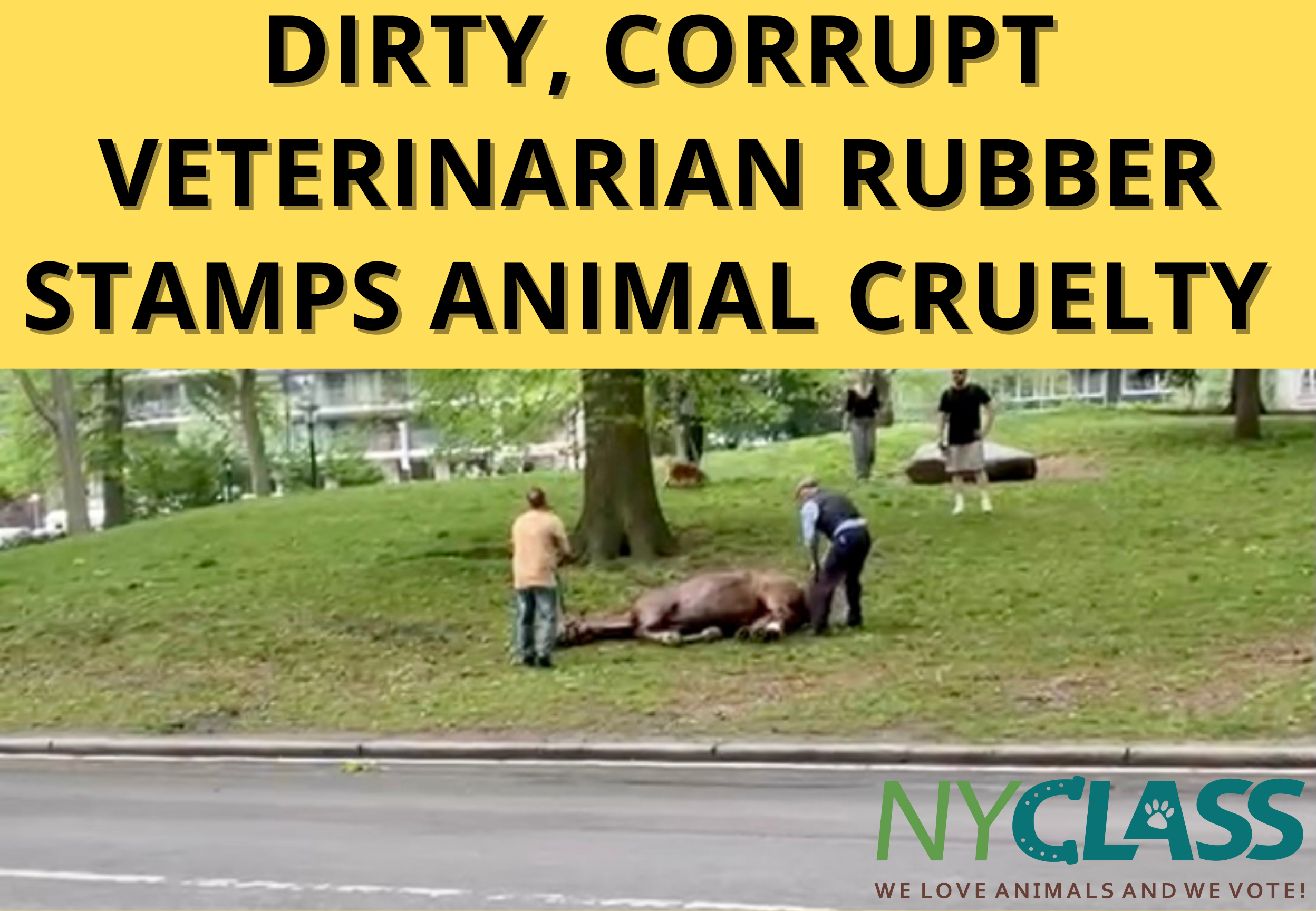