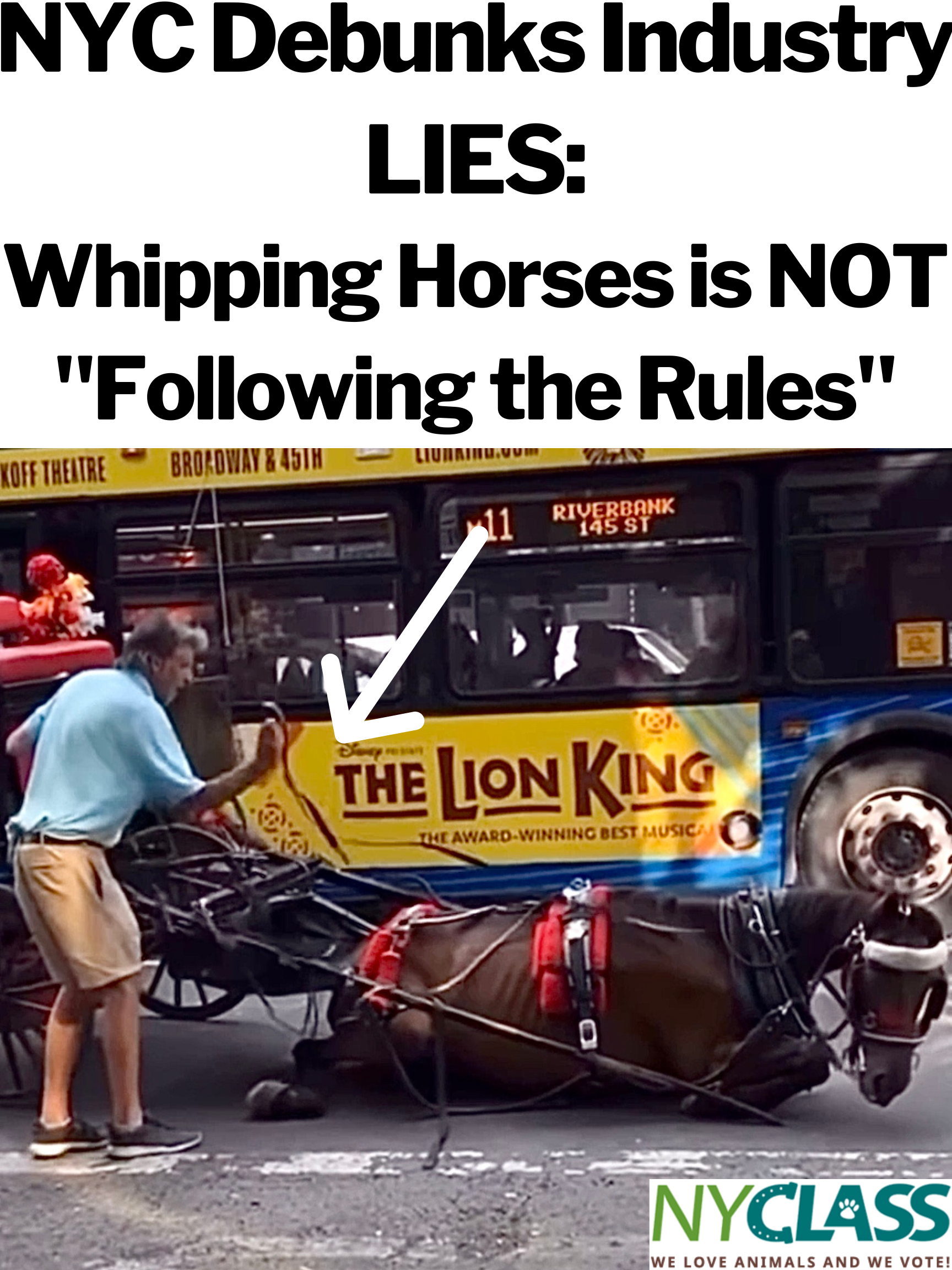 NO, WHIPPING COLLAPSED HORSES IS *NOT* STANDARD PROTOCOL

Video footage captured the incident, showing a horse named Ryder collapsed on the hot pavement in Hell’s Kitchen during rush hour, unable to get up for over an hour. Horrified onlookers surrounded the suffering horse and expressed shock as the carriage driver, Ian McKeever, repeatedly whipped the animal.

In response to the growing controversy, Christina Hansen, a mouthpiece for carriage horse owners, attempted to minimize the horrific incident by claiming that flogging a collapsed horse is a standard practice, and that the driver was simply “following rules laid out by the city’s Department of Health for what to do in such circumstances.”

The Department of Health has now clearly debunked Hansen’s absurd claim: "Thank you for reaching out on this report that the driver was ‘following rules laid out by the city’s Department of Health’ when he was filmed flogging and pulling the downed horse. DOHMH provides training to carriage drivers and does not teach whipping or flogging horses in the training.”

In an unusual development, the same spokesperson, who for years has misled the public and downplayed the seriousness of carriage horse abuse and neglect, announced that the industry now supports the bipartisan call for Manhattan District Attorney Alvin Bragg and NYPD Chief of Detectives James Essig to launch a criminal probe into Ian McKeever’s misconduct and widespread carriage horse abuse.

Christina Hansen — a spokesperson for OnCarriage, a carriage industry advocacy group — said they support the call for an investigation…

“The horse carriage industry and its apologists for abuse cannot be trusted. First they claimed that Ryder’s collapse was a random, spontaneous event – now time-stamped photos from eyewitnesses have shown the horse was in distress hours before he crashed. Then they claimed that a driver caught whipping a sick horse was ‘just following the rules’ – which the Department of Health has completely rejected. Now they support a criminal probe into their own widespread abuse and misconduct? The world is watching and we will not be gaslighted by an industry that has lost all credibility. District Attorney Bragg must launch a criminal probe into this horrific incident as well as the widespread animal and worker abuses in this industry. And the City Council must pass the bill to end carriage horse abuse once and for all,” said Edita Birnkrant, Executive Director of NYCLASS.

A new bipartisan bill (#573), sponsored by Councilmember Holden, will replace horse carriages with modern electric carriages. In addition to reducing horse abuse and making Manhattan streets safer for New Yorkers, the legislation will also require owners to pay drivers a prevailing wage. Today, carriage drivers apparently receive few, if any, benefits or standard worker protections and can be subjected to wage theft.