NEW YORK (AP) — Horse-drawn carriage rides through the streets of New York — an experience nearly as old as the city itself — could be clip-clopping to a halt. 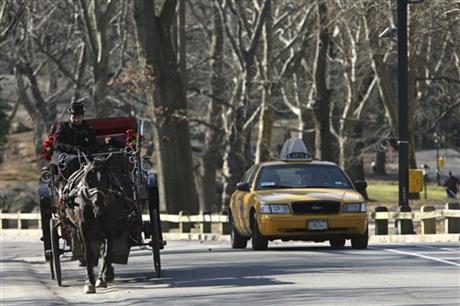 Animal activists who have long argued that horses have no place mixing in the traffic of the nation's biggest city now have the backing of both leading candidates for mayor. And the front-runner heading into the Nov. 5 election, Democrat Bill de Blasio, supports a plan to replace the horses with old-timey electric cars to take tourists on slow-speed jaunts around Central Park.

To the top-hatted horse drivers who dispense lap blankets and tour guide wisdom along with the rides, that plan has about as much charm as a plastic pony.

"People come for the clip-clop of a horse's hooves," said driver Christina Hansen. "Nobody wants to pet a fender."

Ending the city's 155-year-old horse-drawn carriage industry has emerged as an unlikely issue in the recent mayoral debates, and one of the few points of agreement in an otherwise bitter race between de Blasio and Republican Joe Lhota.

That's a marked shift from Mayor Michael Bloomberg, who is leaving office after 12 years. He has consistently supported the horse-drawn carriage industry, saying it's a city-regulated tourist draw.

For de Blasio, the city's public advocate who is leading by 40 points in the polls, the issue is animal cruelty. "We are in the biggest, densest urban area in North America. It is not a place for horses. They are not meant to be in traffic jams."

Lhota has said that he would eliminate the carriage horses, mostly because of the "unfortunate" smell in and around Central Park. He has also expressed interest in some kind of motorized replacement.

But like most matters of New York City politics, it's complicated.

De Blasio is taking a strong stance against the horses, even though he has the backing of the powerful Teamsters Union, which has said it will fight to keep horse-rides to save the jobs of the drivers. Putting an end to the industry would require a vote of the City Council

"Yes, I received support from a union that feels the other way," de Blasio acknowledged when confronted with the contradiction in this week's debate, "but that doesn't change my opinion one bit."

New York's Horse & Carriage Association says a ban on carriage horses means uncertainty for more than 200 operators, 68 carriages and 210 horses that generate estimated annual revenues of about $15 million a year.

The industry notes that it is tightly regulated by the city, which conducts regular inspections. Horses work no more than nine hours a day and spend at least five weeks on a farm each year. A veterinarian examines every animal twice a year. Most of the rides are in Central Park, but the carriages are allowed to go into Rockefeller Center, Times Square and the Lincoln Center area in certain evening hours.

"The horses are working nine hours a day in dangerous midtown traffic and they can be hit by trucks and buses," said Allie Feldman, the group's executive director. "They live a nose-to-tailpipe existence."

Three horses have died in accidents in the last three decades — in 1985, 1990 and 2006 — and the two sides in the debate give widely varying figures on how many horse-involved traffic mishaps there have been in recent years.

For the drivers who line up every day on Central Park South across from the Plaza Hotel, charging $50 for a 20-minute ride, what really is threatened is a romantic slice of old New York, harkening back to the days when horses and carriages were the only way to get around. They talk of driving couples on first dates, marriage proposals and anniversary rides.

The colorful carriages, often festooned with feathers and flowers, have been immortalized in movies and television shows such as Woody Allen's "Manhattan," ''Sex and the City" and "Seinfeld."

"New York City needs this," said Sukru Hasan, a driver who has held the reins for 26 years. "Tourists come and they're so happy, they say, 'This is wonderful' and they call their families to say, 'We're here, we're in Central Park in a carriage with a horse.'"

But NYCLASS says the plan it is promoting for antique replica electric cars would bring its own sense of nostalgia. It is paying $450,000 for a prototype of a 1909 Pierce-Arrow to pitch as the kind of vehicle for a new era of Central Park rides.

Mike Moran, a 56-year-old Los Angeles attorney who stepped off a carriage with his wife, was skeptical.

"That's crazy. I hope it fails," he said "New York would lose so much character without the horses."