Spread The Word: Ask Your Friends To Stand Up For Abused Circus Animals 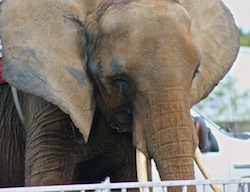 We’re asking you to speak out for the animals Universoul Circus is abusing by sharing this with your friends. Universoul has employees and trainers who were ARRESTED on animal cruelty charges in other cities for using bullhooks on elephants, denying animals veterinary care, keeping animals in cramped cages for agonizing hours on end, and so much more.

Even worse? Groupon has partnered with Universoul to sell coupons to witness the cruelty.

To get Groupon’s attention, we’re going to need thousands more to speak out by signing the petition demanding that Groupon cut ties with Universoul Circus.

SHARE this with your friends and ask them to stand up for animals and urge Groupon not to sell animal abuse!