Joe Lhota’s mayoral campaign is crying foul on one of Bill de Blasio’s newest endorsements, from a coalition of 33 teamsters unions. 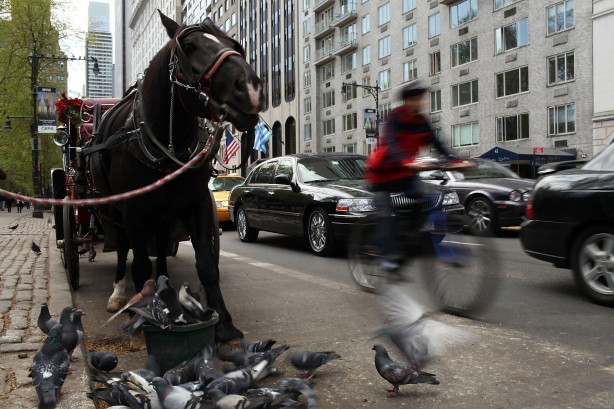 Joe Lhota’s mayoral campaign is crying foul on one of Bill de Blasio’s newest endorsements, from a coalition of 33 teamsters unions.

The Lhota campaign noted that one of those unions is for the drivers of the Central Park horse-drawn carriages, “the very industry [de Blasio] has vowed to abolish.”

Horse-drawn carriages are a political hot button issue in New York City, where the animal advocacy organization NYCLASS has become a force to be reckoned with and a sought-after endorsement.

NYCLASS proposes replacing the horses with “a clean and safe alternative to this outdated tradition — the 21st Century Horseless Carriage.” They were responsible for a vicious campaign of attack ads against Christine Quinn that reportedly cost $774,000, and several news outlets wrote about the de Blasio campaign raking in almost $15,000 in campaign donations from NYCLASS members after changing his tune on the issue.

The Lhota campaign noted that de Blasio had until recently sided with the horse carriage drivers, in favor of keeping the horse-drawn carriages. But at a mayoral forum before the primary election, he vowed to “ban the horses carriages in Central Park within the first week on the job.”

In fact, de Blasio had a confrontation with carriage drivers just a few days before the primary election, including a representative from Teamster Joint Council 16, the coalition of 33 teamsters union that endorsed the Democrat on Wednesday.

But on Thursday, Teamsters Joint Council 16 spokesperson Nell O’Connor stood firm by the coalition’s de Blasio endorsement when questioned about the candidate’s position on the carriage issue. She said de Blasio is “obviously… the labor candidate.”

“We agree more than disagree with Bill,” she said. “We represent hundreds of thousands of teamsters. We represent a number of other industries; Bill has been great for some of those industries.”

That is not to say they are totally on board with his anti-carriage position, however.

“We will continue to advocate and fight for the horse carriages and hopefully he’ll listen,” she added.