In Carriage Horse Fight, the Daily News Is Really Having Trouble Keeping Fact and Opinion Separate

Where are their ethics?

On April 16, the New York Daily News announced they were wading into the carriage horse fight full-force, "launching a campaign to save the city's beloved carriage horses," as an editorial published that day put it. They've begun circulating a petition online and in print, calling on Mayor Bill de Blasio to leave the horses alone and criticizing animal rights group NYCLASS's proposal to replace the horses with vintage-replica electric cars.

At the same time, News reporters are also continuing to cover the carriage horse debate that the opinion page has now inserted themselves into. That's leading to some awkward conflicts of interest. In a statement released earlier this week, NYCLASS says that a Daily News reporter who assured them she was interviewing them for a feature story instead improperly gave her reporting materials to the opinion page, for use in an unflattering editorial.

The Daily News published the editorial announcing that they would campaign on behalf of the carriage industry at 2 a.m. on April 16. The editorial featured a photo of the interior of NYCLASS's electric car prototype. The only problem there is that the electric car prototype hadn't yet been unveiled. That happened yesterday, at the New York Auto Show at Javits Center. Here's a photo NYCLASS shared on Twitter: 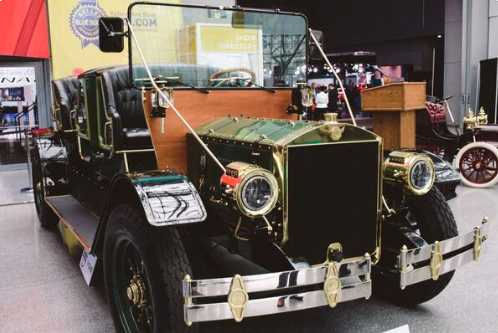 So how did the tabloid get that never-before-seen photo of the car's interior, which has no credit or photographer's name attached to it? From NYCLASS themselves. In a statement, NYCLASS says they offered a News reporter, Erin Durkin, an exclusive first look at the car "several months ago." They add, "she assured us multiple times that her story was for the print edition of today's (April 16) Daily News."

Instead, NYCLASS says, "her story did not run in the newspaper, and the opinion pages improperly took the fruits of her news reporting for their own use."

NYCLASS is unhappy. "We fully support the freedom for editorial and opinion writers to express their views, whatever they may be," wrote spokesperson Allie Feldman. "But when newspapers misuse their news staffs to gather information for their publishers' pet causes, then we should all be alarmed." In their statement, they indicate that Durkin gave them a "written apology."

Reached via email, Durkin declined to comment. She referred questions not to a Daily News editor, but to a public relations agency, Source Communications, which is apparently authorized to speak on the paper's behalf. The CEO, Ken Frydman, told us in an email, "The Daily News does not comment on its editorial decision-making." (Update, 6:00 p.m.: In another odd conflict of interest we failed to notice before publishing, Frydman is evidently also advising the carriage drivers on their media strategy. That's according to thisNew York Times editorial by Liam Neeson.)

Although they have complained about Durkin's ethics, NYCLASS still seems happy with her finished article, displaying it prominently on their own website. They didn't immediately respond to our request for comment about the incident.

Meanwhile, a different Daily News reporter says that during the unveiling of the electric car at Javits Center, NYCLASS founder Stephen Nislick threatened to punch their photographer. (That article, by the way, isn't an opinion piece, though it's running online with a big, bold "Save Our Horses Campaign" logo alongside the text.) Nislick allegedly muttered, "Let's get away from the Daily News before I hit her in the face."

The News also claims that Nislick had to be forcibly "steered away" by a handler to avoid punching the photographer, and that he refused to speak to one of their reporters. Look for those tidbits in an upcoming Daily News editorial, we bet.

Clearly, hostilities between the two sides are worsening by the day. Things will get even more uncivil this weekend, when NYCLASS and PETA have planned a joint protest in front of the Upper West Side apartment building of actor and carriage horse supporter Liam Neeson.

Correction: An earlier version of this post stated that the NYCLASS statement was authored by Laurin Manning. Manning is NYCLASS's webmaster. The statement was written by spokesperson Allie Feldman. We regret the error.

We fully support the freedom for editorial and opinion writers to express their views, whatever they may be. But when newspapers misuse their news staffs to gather information for their publishers' pet causes, then we should all be alarmed. Several months ago, Daily News reporter Erin Durkin was promised an exclusive look at the electric cars we are unveiling tomorrow (April 17), and she assured us multiple times that her story was for the print edition of today's (April 16) Daily News. Instead, her story did not run in the newspaper, and the opinion pages improperly took the fruits of her news reporting for their own use. We appreciate Erin's written apology for this ethical breach by her editors.