The Problem: Horse Drawn Carriages Are Cruel and Inhumane

"The life of a carriage horse on New York City streets is extremely difficult and life threatening, and the ASPCA has long believed that carriage horses were never meant to live and work in today’s urban setting." ~American Society for the Prevention of Cruelty to Animals (More from the ASPCA here and here.)

In just the few years, the following incidents have happened, causing great concern: 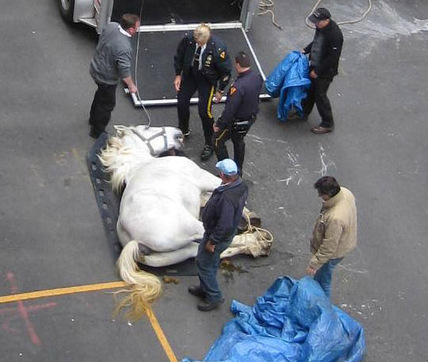 The harsh reality of the life of a carriage horse working in New York City is that horses simply are not meant to work in dangerous midtown traffic.

The 220 horses live a miserable nose-to-tailpipe existence. They routinely work at least nine hours a day, seven days a week, pulling a vehicle that weighs hundreds of pounds, on hard pavement, while breathing exhaust from cars, buses and taxis. Unaccustomed to the urban environment, horses can be "spooked" easily and cause accidents that inflict great damage on vehicles, drivers and most often, the horses themselves. There were more than 30 accidents in the past few years alone -- and those are just the known accidents reported by the public.

At the end of the day the horses travel 1-2 miles through dangerous rush hour traffic to their stalls in stables in Hell's Kitchen by the Lincoln Tunnel and the busy West Side Highway, or as Jon Stewart once called it, "The sad-eyed horse carriage district." The carriage industry denies the horses any daily turn-out or pasture time to graze, roll and socialize freely on grass, which equine veterinarians agree is needed daily for horses to live healthy lives.

At least seven carriage horses have died in NYC according to Department of Health records.

After they work the busy and unsafe streets of NYC, the carriage horses are often sold to auctions in Pennsylvania where they can be - and are - sold to kill-buyers who transport the animals to Mexico or Canada to be brutally slaughtered for exported meat.

NYCLASS, ASPCA, The Humane Society of the United States and numerous animal protection organizations have offered to provide adoption homes and lifetime care for every horse when the industry is banned. 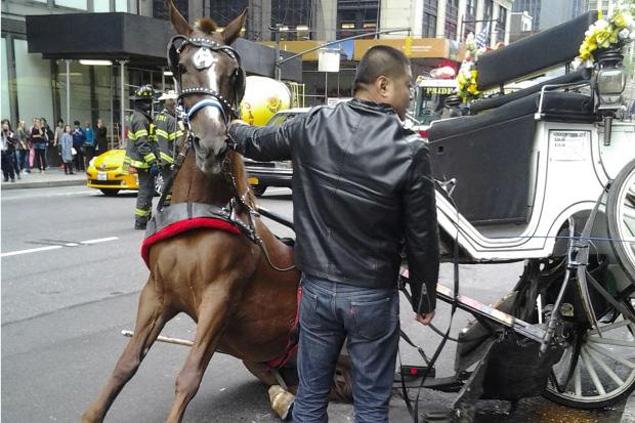 How You Can Help: Take Action To Ban The Horse Carriage Industry in NYC -- Write Your City Council Member HERE.

New York City has had more than 30 known carriage horse accidents & incidents in the past few years alone -- not including many accidents that go unreported by the industry. Below are just a few examples: 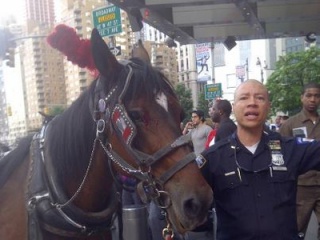 The horse carriage industry is a cash only business which does not use meters. Carriage drivers routinely overcharge residents and tourists rates above what they are legally entitled to charge. At the same time, the City annually spends hundreds of thousands of dollars to monitor the horses, clean manure from streets and repair roadways damaged by the carriages -- because the industry pays zero concession fee to the City.

Additionally, anyone who spends more than five minutes at the hackline to observe the carriage horse drivers will routinely witness them blatantly breaking city law, such as illegal u-turns, running red lights and tying horses to telephone polls.

Horse carriages are dangerous to passengers, carriage drivers and others who use New York streets. Horses spooked by loud noises on busy streets have bolted into traffic, sending coachmen and other drivers to the hospital, and leading to the horse’s death. In addition to the immediate safety risks caused by horse carriages, jagged ruts made by carriage wheels are dangerous for cyclists, runners and pedi-cabs using the areas in and around Central Park. The horses are also exposed to conditions that present a danger to their wellbeing, causing dehydration, permanent injury and even death.

Slow moving carriages hold up traffic on already over-crowded streets, causing back-ups and blocking busy streets and cause delays for ambulance and first responders. Accidents, big or small, caused by the horse carriages can delay drivers for hours. This traffic congestion is not only frustrating for drivers; the idling cars also increase the amount of car exhaust in the air, polluting the air we breathe and accelerating global warming.

The areas where the carriages line up to wait for customers have an unpleasant odor that disturbs nearby residents and visitors. Carriage drivers often do not clean up after the horses, leaving waste and rotting debris in New York’s streets. Even, worse, city health officials must regularly monitor the horses for diseases that could be transmitted to other animals and even to the human population.