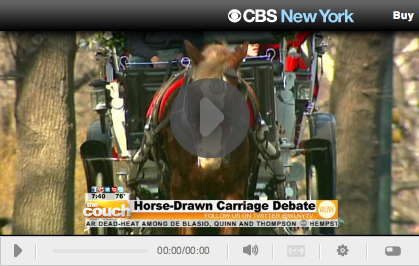 The ongoing battle over banning the practice has been reignited by the mayoral race, and celebrities have weighed in on the issue. A prominent New Yorker and business man is also joining the fight. Gym mogul David Barton and Dan Mathews of PETA joined us on The Couch to talk about the issue.

It’s not the first time horse-drawn carriages have been in the headlines. Just last spring, there was a new push under way to eliminate them: A Brooklyn-born car designer in Florida debuted his plans for horseless carriages.

The horseless model would be able to accommodate eight passengers at a time and could also include a sound system and seatbelts,

Animal rights groups supported the measure. The carriage would be modeled after the electric cars from the early 1900s.