Georgina Bloomberg has drawn attention for her young-adult fiction, her achievements as an equestrian and, most recently, for a pregnancy that will make her father, Mayor Michael Bloomberg, a grandfather. 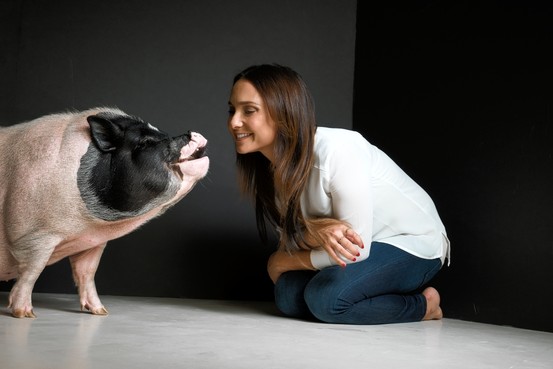 Georgina Bloomberg and Wilbur in April at her home in Florida.

Georgina Bloomberg has drawn attention for her young-adult fiction, her achievements as an equestrian and, most recently, for a pregnancy that will make her father, Mayor Michael Bloomberg, a grandfather.

Now, the 30-year-old Ms. Bloomberg says she wants to make an impact in another way: expanding her role in improving animal welfare in the city, which now includes criticizing the Bloomberg administration's track record on the issue.

In a wide-ranging interview, Ms. Bloomberg wouldn't reveal exactly how she planned to do that. But she had harsh words for Animal Care & Control, a nonprofit group commissioned by the Bloomberg administration to run the city's animal shelter system.

Animal Care & Control has been under contract with the city's Department of Health and Mental Hygiene since 1995 to rescue, care for and find homes for abandoned animals. The organization is essentially controlled by the Bloomberg administration, and that, Ms. Bloomberg said, is a problem.

"Government doesn't care about animals," she said, noting that, on the large list of issues the city must deal with, animal welfare can be a low priority. Of city animal shelters, she said they aren't "a place where people want to go to adopt animals, which, to me, is a failure."

Risa Weinstock, Animal Care & Control's executive director, said her organization has achieved much. "Our efforts to find homes for abandoned pets have more than doubled animal placements while reducing euthanization by two-thirds over the last 10 years," she said.

With the City Council's help, she said, the city committed last year to increasing the organization's budget 77% by 2015.

Ms. Bloomberg's comments were in line with a stinging report from Manhattan Borough President Scott Stringer's office, which found that the organization's adoptions have dropped 37% in the past six years.

Ms. Bloomberg said she doesn't fault the people who work for Animal Care & Control, but she said it is hamstrung by a problematic governance structure and, in the end, it isn't meeting its mission. Fundraising is also a key problem, she said, in large part because many donors don't have much faith in the organization right now.

Over the years, Ms. Bloomberg has made a name for herself as a leading animal advocate, working with the Humane Society and the American Society for the Prevention of Cruelty to Animals.

She has generally steered clear of city politics and policy however. In the interview, Ms. Bloomberg said she plans to vote for City Council Speaker Christine Quinn to succeed her father as mayor.

On another controversial animal-rights issue, the horse-drawn carriage industry, Ms. Bloomberg appears to be at odds with Ms. Quinn and her father.

A number of advocates believe the city should abolish the practice, a big tourist attraction, because it is inhumane to the horses. Others, including the mayor, say it is a viable industry and that the horses are cared for appropriately.

Ms. Bloomberg didn't take an official stance, but her remarks made it clear where she is leaning. "Obviously, for me, my heart is always with the horses and I always want them to be kept in the best condition possible, which I don't believe they are," she said of the horses who work Central Park. "Maybe the time has come for them to go."

She said she understands there are carriage operators who treat their horses very well and she believes they have a right to earn a living. "But at the same time," she said, "If it's just about the horses, then, no."

Stephen Malone, a spokesman for the Horse and Carriage Association of New York, said: "Her father has been one of our biggest supporters so it baffles me that she would take such a stand."

Mr. Malone said he has long wanted to get Ms. Bloomberg to tour the horse facilities in the city, but he has never been able to coordinate such a meeting. There is no proof that any of the horses have been mistreated, he said. Ms. Bloomberg is "drinking the animal-rights Kool-Aid."

Ms. Bloomberg is an accomplished equestrian, participating in top competitions. Now that she is 3½ months pregnant, she said she has had to consider when she temporarily will stop competing. For now, she is off to Europe this week for horse-jumping competitions. "I'm kind of just taking it week by week and listening to my body," she said, predicting she will hang up her helmet sometime next month.

She said she knows the baby's gender but declined to disclose it. The baby's father is Ramiro Quintana, a fellow equestrian. Ms. Bloomberg said she has known him since she was 15 years old. They have now been together since the end of last summer, she said. He is originally from Argentina and has lived in the U.S. since 1996, she said. "He's very excited" about fatherhood, she said.

Meanwhile, she has already introduced her father to her pet pig, Wilbur. She brought him to Gracie Mansion on Thanksgiving but learned something new. "I did not know that pigs were not allowed in New York City," she said.