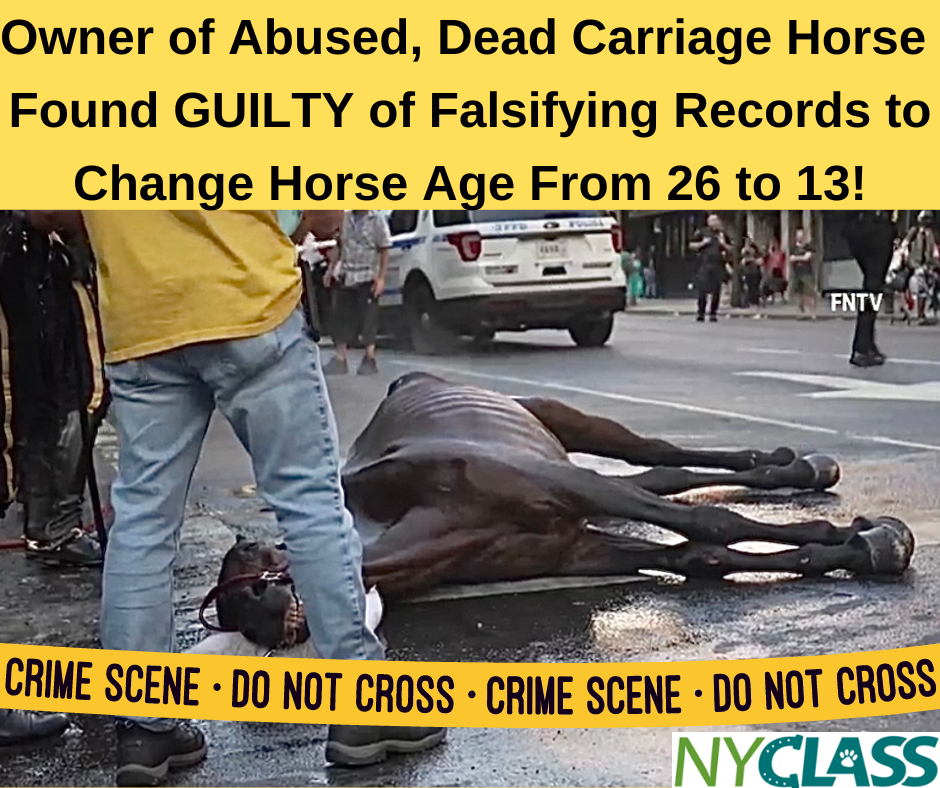 NYCLASS Calls for Criminal Animal Abuse Charges Against McKeever Brothers, and Passage of Bill to Phase Out Horse Carriages in NYC

BREAKING – Colm McKeever, owner of carriage horse Ryder who collapsed and died following long-term mistreatment, was found guilty in a NYC Department of Health case after he submitted falsified veterinary records to the City that claimed the animal’s age was 13, when it was actually 26, in order to obtain a horse license. Records show that McKeever paid a $1,000 fine, but he’s still allowed to own and operate several horse carriages in New York City. Another violation for submitting false veterinary records is pending for McKeever, and the hearing date is January 30, 2023. Colm’s brother, Ian McKeever, was driving Ryder the day he collapsed last August and was captured on video aggressively whipping the horse while he was motionless on the hot pavement.

Edita Birnkrant, Executive Director of NYCLASS said, "Colm McKeever received a pathetic slap on the wrist after falsifying veterinary records in order to work a sick, elderly horse to death. Animal abuse is a crime, and both Colm and Ian McKeever should be charged by Manhattan District Attorney Alvin Bragg for violating numerous New York State animal cruelty statutes related to the horrific final months of Ryder’s life. It is an outrage that both of these animal abusers still own several horses and operate multiple horse carriages right now. We call on NYC Council Speaker Adrienne Adams, Health Committee Chair Lynn Schulman, and the entire City Council to fast-track the passage of Intro 573 (Ryder's Law) to stop this widespread abuse. The cruelty Ryder suffered is just the tip of the iceberg - over 150 horses are suffering every day on city streets – collapsing, crashing into vehicles, being worked while injured and sick, and dropping dead. There are no more excuses for stalling, an overwhelming majority of New Yorkers want to phase out horse carriages now.”

If you are a NYC resident, contact your own Council Member and urge them to sign on as a co-sponsor of Intro 573. Find your Council Member's contact info HERE.