Defeating Christine Quinn – how an anti-Quinn advocacy group came together

They named their advocacy group Anybody But Quinn and in the end they got exactly what they wanted. 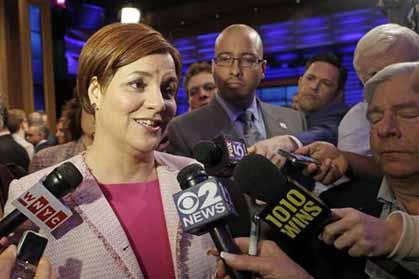 Supporters and critics of their unusually impassioned on-the-ground campaign to oppose longtime front-runner Christine Quinn for mayor can agree on one thing – it was wildly successful.

Now, after the mayoral election has come and gone and the group's preferred candidate Bill de Blasio has been elected, they have reason to reflect on their own performance. Chelsea Connor, a spokesperson for the group, now recalls how they planned their ground game with some satisfaction.

“On April 8 our first ad hit the airwaves,” Connor tells IrishCentral. “We’re very proud of it; it was striking while the iron was hot. Early on in the race it was virtually a three way race between Bill Thompson, Bill de Blasio and Quinn and she had emerged as a front runner. There really wasn’t a second place person. Often when that happens in politics you have to swoop in.”

Swoop in they did. Long before other politicians had flooded the airwaves Anybody But Quinn got their message out. The effect was almost immediate. By July, after their second, third and fourth ads started to air on local and network TV, Quinn's numbers dropped by 20 points and her negatives rose dramatically.

Then in July they switched to a ground game, Connor explains.

“For us that was the big win. From there we transitioned from TV and radio onto the ground. We had always handed out flyers, we then recreated what we called the St. Vincent’s hospital waiting room in City Hall park. We stood at subway entrances and handed out plastic cigars. It was a very fun campaign.”

Plastic cigars, chaotic waiting rooms, the message was simple: Quinn is for the fat cats. Haven't we had enough of them?

“It’s all about meeting the voters,” Connor explains. “Shaking hands and talking to people is how you win votes.”

A dynamic coalition came together united in opposition to Quinn's record, Connor explains. “New York County Lawyers' Association (NYCLA) came together with social activist Wendy Neu and the Communications Workers of America (CWA Local 1180) around the issue that Christine Quinn would be bad for New Yorkers on the issues of paid sick leave, on failing to keep Saint Vincent’s Hospital open, on the issue of the minimum wage.”

For NYCLA it was the horse and carriage issue. For the CWA it was the labor issues. It was social issues for the activists. But they all agreed anyone but Quinn would be the better candidate. And CWA (one of Bill de Blasio's most supportive unions) put money on it, more than $500,000, in fact. The decision to spend funds at that level was made by the CWA’s national-level Defense Fund Oversight Committee.

For Connor it was nonetheless a David versus Goliath issue: “Quinn certainly would have been a continuation of the Bloomberg era policies where the wealthiest New Yorkers had their say in government. Our campaign sought to really give voice to the everyday New Yorker who wouldn’t be able to afford to politically influence the mayor.”

The Irish American community strongly supported Quinn, being one of their own, but their support alone was not sufficient to secure her candidacy. “My great grandfather came here in the 1800’s,” says Connor. “My whole family is Irish American. It was learning about her positions that did it for me.”

One key aspect of the erosion of her support happened where it may have been thought least likely to, among New York's LGBT community.

“I think when you close a hospital that not only was so integral to their (LGBT) history and their everyday life, that’s something that doesn’t help you,” says Connor. (In the 1980's St. Vincent's was the first line in the fight against AIDS). “When you are willing to sacrifice the rights of animals, the rights of people on issues like living wage, on issues like paid sick live, it becomes clear very quickly that this isn’t a person that’s going to fight for you.”

There were a lot of articles on why women weren’t voting for Quinn, but not enough on why the LGBT community wasn’t coming out for her in full stride.

And what was the lesson for Connor herself?

“I think going forward that the voices of many New Yorkers can conquer the voices of the privileged few, and that’s what we saw on election day. The beauty of independent campaigns is that you can gather a coalition. We had hundreds of thousands of New Yorkers sign up to be volunteers on our Facebook and Twitter pages. Our coalition really was the voice of the people and I think that represents a shift in New York and national politics.”