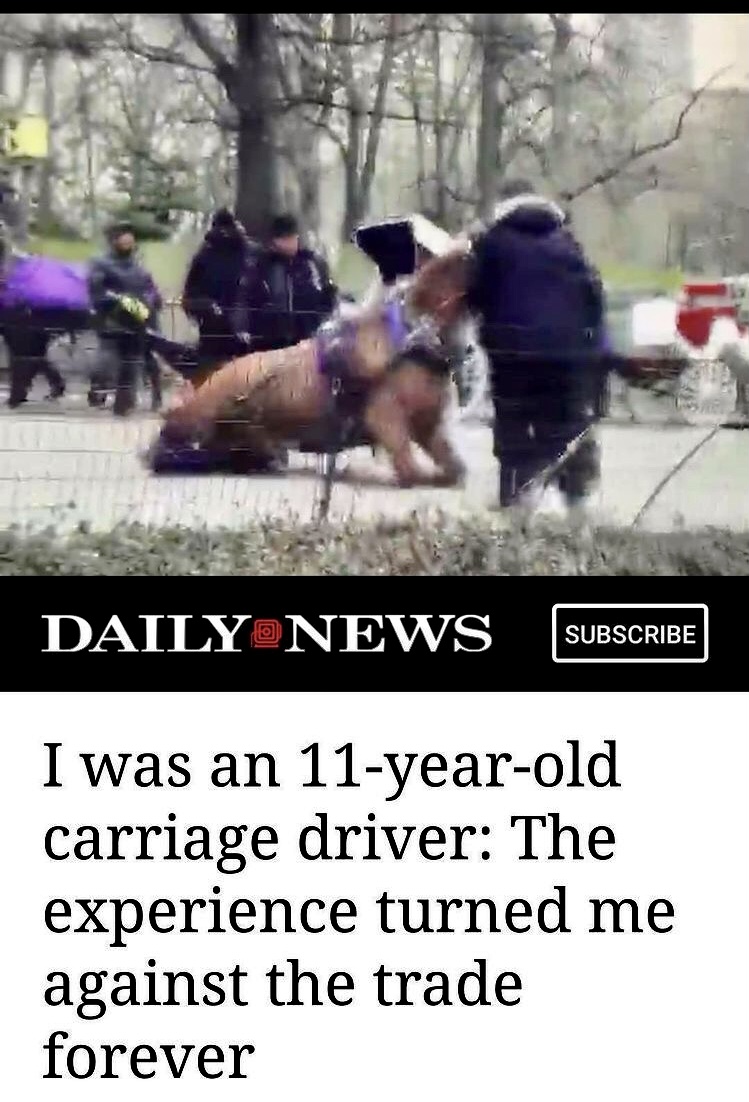 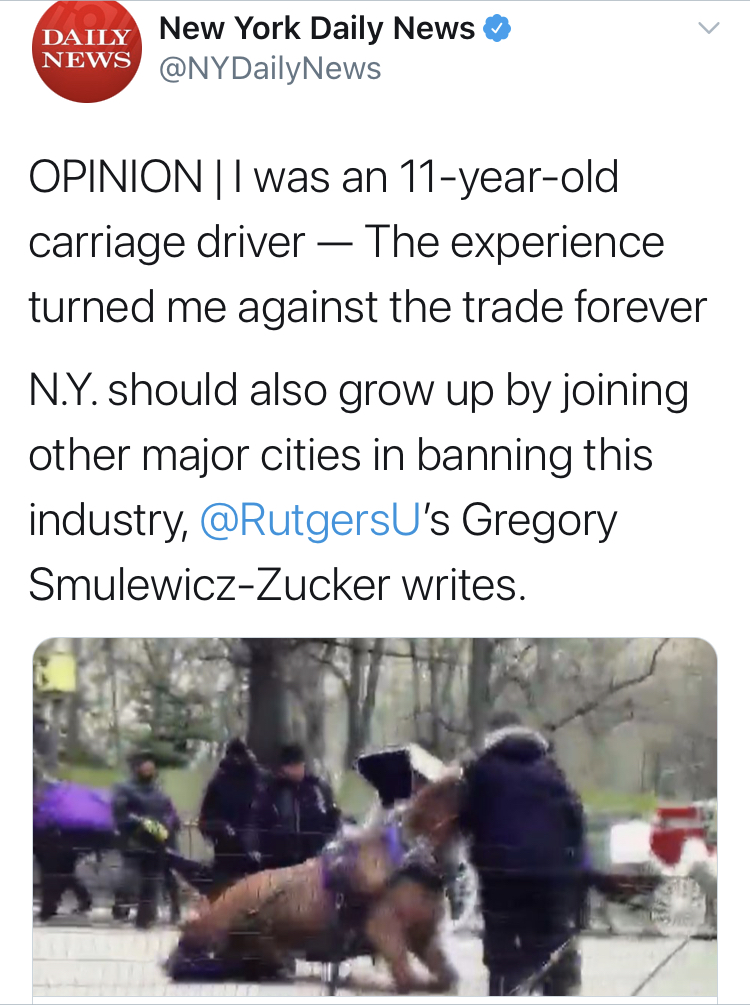 Horse abuse, cruelty and law-breaking by carriage drivers is still happening EVERY DAY to NYC's carriage horses - which is why we need YOUR help to enact a BAN.

TAKE ACTION by contacting your New York City Council member THIS WEEK and urge them to support a BAN on abusive and dangerous horse carriages.

I was an 11-year-old carriage driver: The experience turned me against the trade forever

The images from Dec. 20 of a carriage horse who collapsed on the ice while carrying a family with a small child are heartbreaking. After the horse struggled to return to his feet, the driver resumed the ride without consulting a veterinarian. I have some insight into the cruelty and hardship the horses endure because, at the age of 11, I drove a carriage for over a year and a half.

Like many children, I loved animals and was eager to spend time with them. When a trusted family friend who drove a carriage invited me to visit him at work, I begged my mother to let me go. After a brief lesson, I was driving passengers all over midtown and Central Park with him seated at my side. This became a weekend activity.

An 11-year-old driving a carriage (even if supervised) was and still is illegal and dangerous. With the assistance of other drivers, we kept an eye out for the cops. I was always ready to subtly hand my friend the reins. It was exhilarating, and seeing a child in the driver’s seat was a novelty for tourists.

I have many wonderful memories of those weekends with the horses and a man who became like a big brother. Initially, I held the naively idyllic perspective of many who only see the horses in the Park. Only gradually did I learn of the everyday abuses the horses suffer.

The stable hands regularly and willfully neglected the horses, frequently forgetting to feed them or clean the stalls, leaving them to stand in their own filth. Stable hands and drivers alike would regularly punch horses on the nose for any small infraction. The horses had no pasture (and still do not). Their only relief from dragging the carriage came when they were crammed into their stalls.

Driving through New York City’s infamous traffic was always marked by assaults on the horse’s senses. Cars honked, blew exhaust in the horse’s face, and swerved around us. In an instant, a car’s sharp turn, a bicyclist cutting too close, or any of the city’s myriad sounds could jolt or spook a horse. Only broken animals could silently suffer the unnatural chaos surrounding them.

We spent hours in weather that ranged from New York’s sweltering summers to the now-famous blizzard of 1996. It was still legal to solicit customers in Times Square or Rockefeller Center and, if a customer was willing to pay, we would literally march the horses from one end of Manhattan to the other.

I was fed a slew of absurd justifications for the mistreatment: Horses like to work, they endure worse weather in the wild, and, even, they’re so large that they don’t feel smacks across the nose. Though never persuaded, who was I to argue with self-appointed experts? Indeed, I have some empathy for drivers because I glimpsed into their lives. Nevertheless, any fondness is colored by memories of brutishness.

My most vivid memory is of a newly acquired horse who was terrified by the city’s numerous manhole covers. With passengers aboard, I witnessed the horse begin wildly kicking when steam seeped out of a manhole in the middle of Sixth Ave. The driver leaped from his seat and, confronted by his own helplessness, mercilessly punched the horse till it relented. Venting his rage for the humiliation it caused in front of customers, I saw the driver deal countless sporadic smacks to the horse throughout the remainder of his shift.

The next weekend, I asked after the horse. “Dog food,” I was told.

Some of the conditions these horses face over the years have improved in spite of resistance from the carriage industry. Standards have risen. But the fundamental fact remains that forcing them to pull carriages through an urban environment is institutionalized cruelty.

In February 2020, I was appalled by the video of a carriage horse named Aisha collapsing. The images of panicked drivers mishandling her as they tried to drag her onto a trailer, causing her to flip over many times, were too familiar.

Aisha was euthanized at the stable. Representatives of the industry insist her case was unique. My memories are over 25 years old. However, even if the industry half-heartedly complies with common-sense reforms imposed by legislators, events like Aisha’s death are consistent with the mundane ugliness I remember.

Carriage rides remain seductive to customers because we derive enormous pleasure from horses. As a child, I learned that pleasure is not worth complicity in an animal’s misery. New York should also grow up by joining other major cities in banning this industry. On Jan. 1, it was seven full years since Mayor de Blasio pledged to ban the carriage industry on his first day in office. The mayor ought to finally keep his promise during his last year in office.