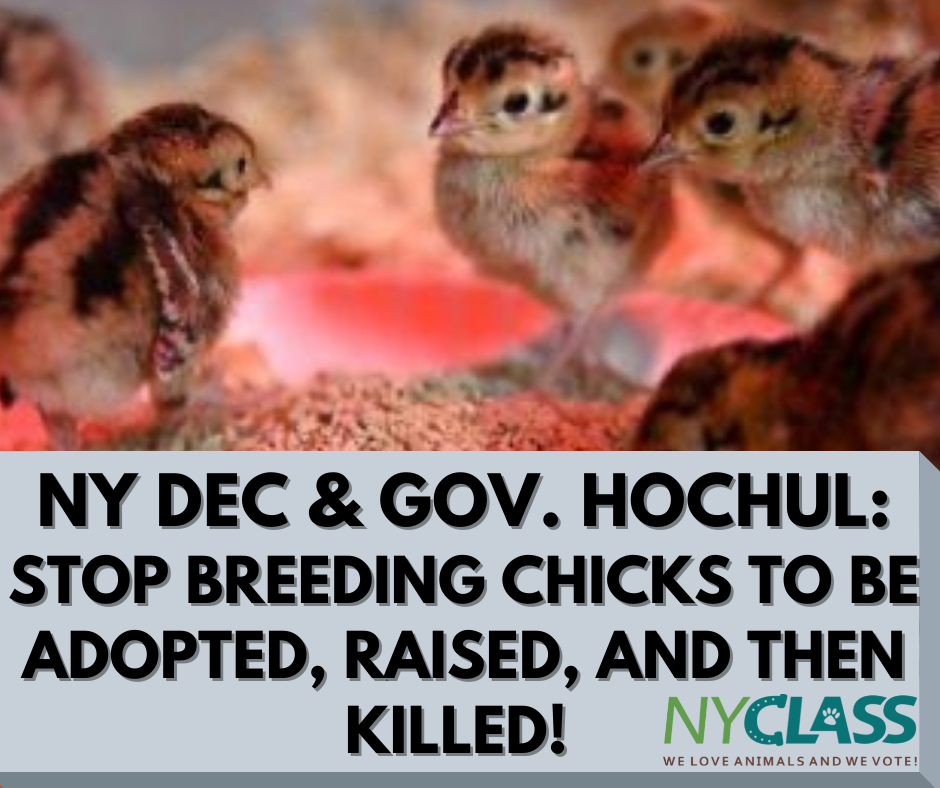 BORN TO DIE: NYCLASS CALLS ON HOCHUL ADMINISTRATION TO END STATE PROGRAM THAT ARTIFICIALLY BREEDS PHEASANTS JUST TO BE KILLED

90% Of Farm-Bred Pheasants Released Are Killed by Predators, Not Hunters

NYCLASS today called on the Hochul administration to end a program that provides New Yorkers with day-old pheasant chicks to be bred in pens and then released into the wild for the sole purpose of being killed. Hunters, conservationists, and wildlife officials have called the practice known as ‘stocking’ to be “futile,” “not successful,” and “inappropriate” as the farm-bred animals are unable to adapt to wildlife conditions. Up to 90% of the birds are killed by foxes and other predators.

Pro-hunting states, including South Dakota and Minnesota, have phased out these efforts decades ago because they did nothing to increase the wild pheasant population, while New York’s Department of Environmental Conservation continues to promote its program. NYCLASS called on DEC Commissioner Basil Seggos to halt the program before the delivery of day-old chicks is set to begin next month.

“Before any day-old chicks are distributed to New Yorkers, the Hochul administration must end the failed policy of artificially breeding pheasants for the sole purpose of killing them. Like the Lana Del Rey song, these animals are literally born to die,” said Edita Birnkrant, Executive Director of New Yorkers for Clean, Livable and Safe Streets. “In addition to the obvious cruelty of this program, these birds do not have the same instincts or skills as wild pheasants and 90% of them are killed by predators. Study after study has shown that 'stocking' farm-raised pheasants is a futile exercise that does not lead to re-population. Minnesota and South Dakota stopped releasing pheasants into the wild decades ago, why is New York still promoting this ineffective, grotesque practice that even pro-hunting states have phased out?”

TAKE ACTION: Email NYS Department of Environmental Conservation Commissioner Basil Seggos HERE and urge him to END the cruel, failed program that breeds baby chick pheasants for the sole purpose of having them hunted. CLICK HERE TO EMAIL.