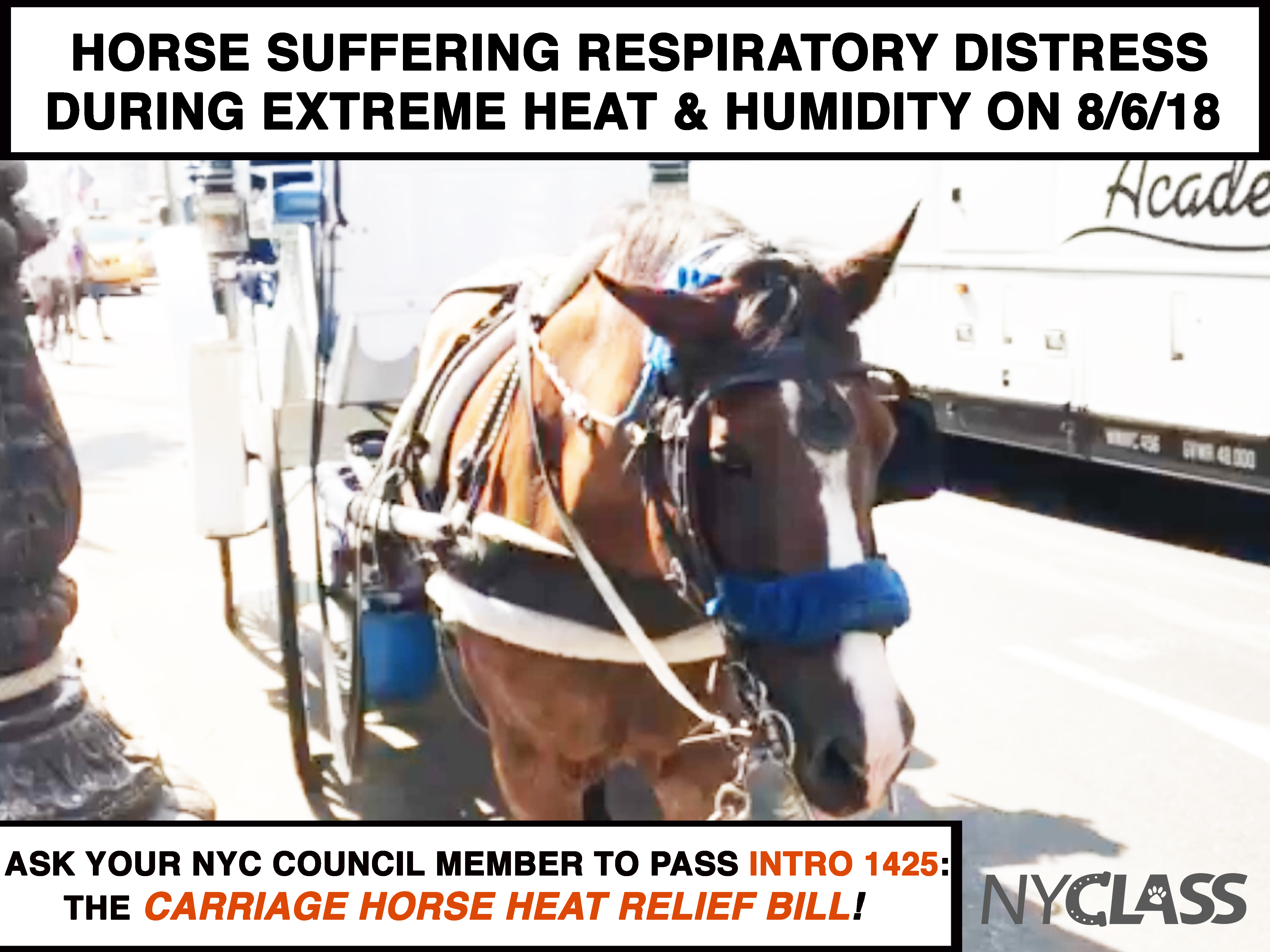 New York City humidity in the summer is a health hazard for carriage horses, but with the help of the NYC Council and YOU we can help make their lives more humane!

In an essential new bill introduced TODAY, February 13th, by City Councilmember Keith Powers, and 14 co-sponsors, the Carriage Horse Heat Relief Bill--Intro 1425 will broaden important protections for carriage horses during NYC's sweltering summers. Read the Bill in its entirety here. Currently, carriage horses only stop being worked when it is 90 degrees Fahrenheit outside, but that's not good enough. This new bill critically takes into account humidity and stops horses from working when the heat index, or "real feel" is 90 degrees. With your help, we can make this common sense policy a reality.

If you live in any of the five boroughs of New York City, call your New York City Council Member THIS WEEK and urge them to co-sponsor and support Intro 1425--the Carriage Horse Heat Relief Bill.

Carriage horses forced to pull carriages when the heat index is above 90 is abuse and it should not be tolerated. Find your Council Member’s office phone number here: https://council.nyc.gov/districts/

In New York City, we are all too familiar with the scene of collapsed horses, horse and vehicle crashes, spooked horses running wildly into traffic, and horses being forced to work in dangerous weather extremes such as heavy snow, rain, and extreme heat, humidity and cold. NYCLASS has documented and shared with you video of horses being worked in extreme heat and humidity and suffering respiratory distress this past summer  when the real feel temperate and heat index was far higher than 90 degrees. It happens all too often and now we have a chance to make it stop.

This new bill would extend protections to factor in the heat index, or “real feel” temperature, which we all know can feel far worse than air temperature alone.  As such, whenever the heat index is 90 or above, horses likewise should not have to be forced to drag thousands of pounds in dangerous humidity and heat through congested traffic or sit under the blistering sun with no shade waiting for fares.

This bill also makes key changes to an archaic system where either the NYPD or DOH measure temperatures in a haphazard way. Instead, high tech readers will be used to measure the temperature and relative humidity – the two components of the heat index. The formula used will be the same one developed and used by the National Weather Service. The introduced heat index bill is a small step for a more humane City.

Indeed, the history of carriages horses in humidity is bleak. Last summer, the Health Department had to investigate issues where horses had breathing trouble from being out on the streets in the heat and sun during citywide heat advisories.  NYCLASS has documented the temperature of the ground where horses stand to be as high as 115 degrees. A study conducted by Cornell’s Urban Horticultural Institute revealed the temperature at street level in New York could be as much as much as 45 degrees Fahrenheit higher than the temperature recorded by the U.S. Weather Bureau.

And the science is simple – high humidity and heat is dangerous for horses. Being out there on days where it feels like it’s 90 because of the humidity is just as detrimental to a horses’ health as days where it is a dry 90 degrees, if not worse. Per veterinarian and municipal veterinary advisor Dr. Holly Cheever, “Hyperthermia has been found to be a leading cause of death in the carriage horse populations of New York, Atlanta, and Boston... [A] large horse is greatly challenged in its ability to dissipate body heat into a hot environment, especially if high humidity is a factor.”

Smaller cities already make use of the heat index for carriage horse protections. NYC should join these jurisdictions to provide much-needed relief for the horses.

These laws have not been updated in New York in decades. Standards have changed around the country about what is acceptable for animals and what is not. We no longer tolerate the abuse of animals merely for economic gain. Carriage horses working when the heat index is above 90 is abuse and it should not be tolerated.

Let’s make history for New York City carriage horses and change the law so that they no longer have to suffer in the worst humidity and heat every summer.  Let's pass the Carriage Horse Heat Relief Bill--Intro ###

Call your Council Member this week!  Find them here: https://council.nyc.gov/districts/

We have much more work to do to help protect the suffering carriage horses so please continue supporting our efforts so we can continue to make New York more humane for carriage horses and all animals.  More progress to come!