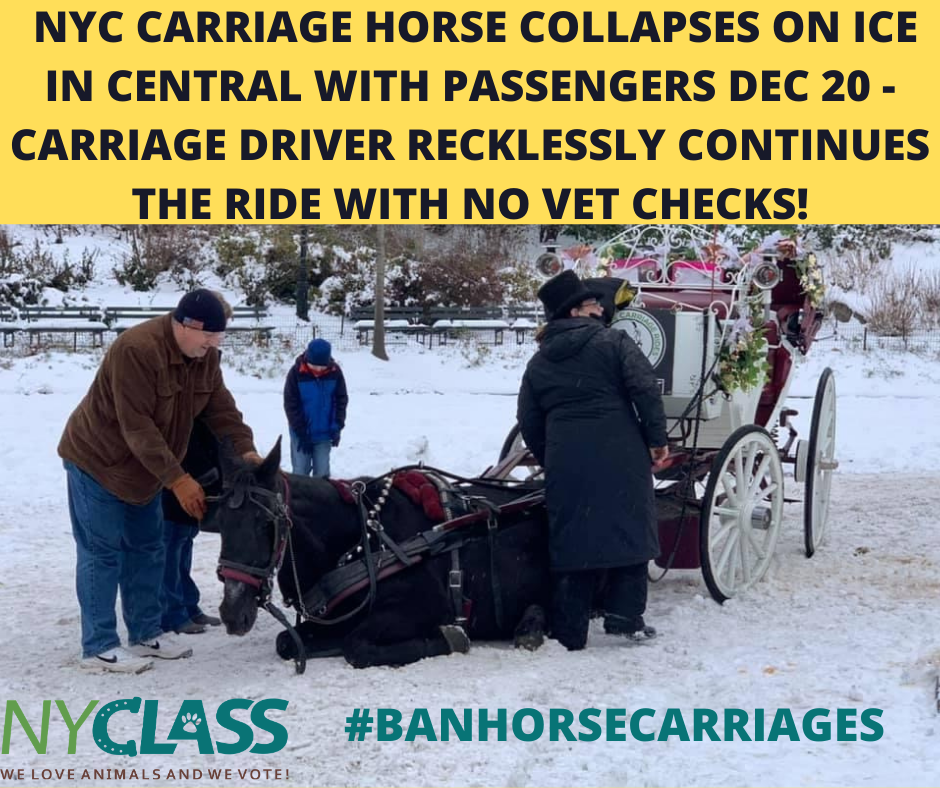 New York City - A carriage horse collapsed on an ice-covered Central Park road at 11:40am today, while two passengers, including a small child, were inside the carriage, according to eyewitnesses who sent pictures and video to NYCLASS.  The downed horse struggled on the icy ground and when finally brought to its feet, the driver of the carriage, industry spokesperson Christina Hansen, shockingly loaded the passengers back in her carriage and continued the ride.  There were no veterinary checks on the fallen horse or even a rest period to ensure they were not ill or injured and would not collapse again on the slippery roads.

NYCLASS Executive Director Edita Birnkrant said, "NYCLASS calls on Mayor Bill de Blasio and Speaker Corey Johnson to issue an immediate suspension of horse carriage rides in these dangerous conditions. On Dec 16 a carriage driver was caught working their horse during the snowstorm after a City suspension was in effect. Just four days later a horse collapsed on ice with passengers in the carriage and recklessly was forced to continue pulling the carriage with no concern shown for the safety of either the horse, passengers or park-goers. This horse should have been immediately brought back to the stable and checked out by a vet - not immediately forced back to pulling a heavy carriage on slippery roads after collapsing. How many more horse collapses and deaths, cruelty, and dangers to the public can Mayor Bill de Blasio and the City Council stomach before they finally end this horse abuse once and for all?"

Dan Matthew, Senior VP of PETA said, "Christina Hansen, the driver who forced the fallen horse to continue working on the ice today, was previously caught working a horse in the blistering heat, against city regulations. Hansen is not just a driver but the industry spokesperson, which shows how little regard the carriage trade has for the suffering of the horses or the law."

*Pictures and videos of fallen horse are available to the media upon request.