A runaway carriage horse wreaked havoc during the start of rush hour Thursday afternoon after breaking free and running off before hitting a parked car near Columbus Circle. 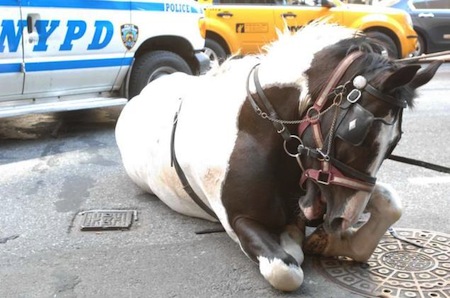 This carriage horse broke from carriage and bolted to 9th Ave and 58th street before collapsing. He was eventually gotten to his feet and removed by NYPD mounted unit to an unknown location.

A runaway carriage horse wreaked havoc during the start of rush hour Thursday afternoon after breaking free and running off before hitting a parked car near Columbus Circle.

Australian tourists Nathan and Kelly Thompson were enjoying a ride around the popular tourist spot around 4:20 p.m. when driver Mehmet Dundar tried to merge into traffic at the circle, witnesses and law enforcement sources said.

The black and white horse - aptly named Oreo - got spooked by a close-passing van and other heavy traffic, sending it into a frenzy, witnesses and officials said.

Six-year-old Oreo bucked and got loose from the carriage, sending Dundar, 34, of Brooklyn, and the Thompsons, both 32, spilling into the street, the sources and witnesses said. 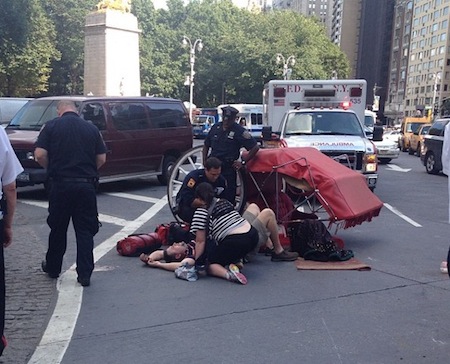 The horse took off and galloped away - hitting a parked car along the way - before officers from the Midtown North precinct corralled him on Ninth Avenue between W. 57th and W. 58th Sts.

“It was a little scary seeing a horse running down Ninth Avenue,” said witness Gaelle Paul.

Officers from the NYPD Mounted Unit took Oreo back to the stable on W. 52nd St. near 12th Avenue.

Dundar was taken to Bellevue Hospital Center with a possible broken leg, sources said. Nathan Thompson was cut on his heel and was seen bleeding in the middle of the street, witnesses said.

The horse - who suffered minor scratches to his mouth - was checked out by a veterinarian Thursday evening, said Joe Pentangelo, spokesman for the ASPCA.

The ASPCA has suspended the horse from working, Pentangelo said, and will examining him again before deciding whether to let him go go back to work.

Meanwhile, advocates against horse-drawn carriages were reeling over the latest incident.

“The carriages are flimsy, people don’t wear seatbelts and it’s open - you wonder why the city would allow something like that especially in such a congested area during rush hour,” said Elizabeth Forel, president of the Coalition to Ban Horse-Drawn Carriages.

Forel said there have been 11 incidents involving the horses in the past year.

“I would tell tourists to go to one of our world-class museums or a movie or a play - something that’s safer,” she said. “Take a walk in Central Park, that’s free.”