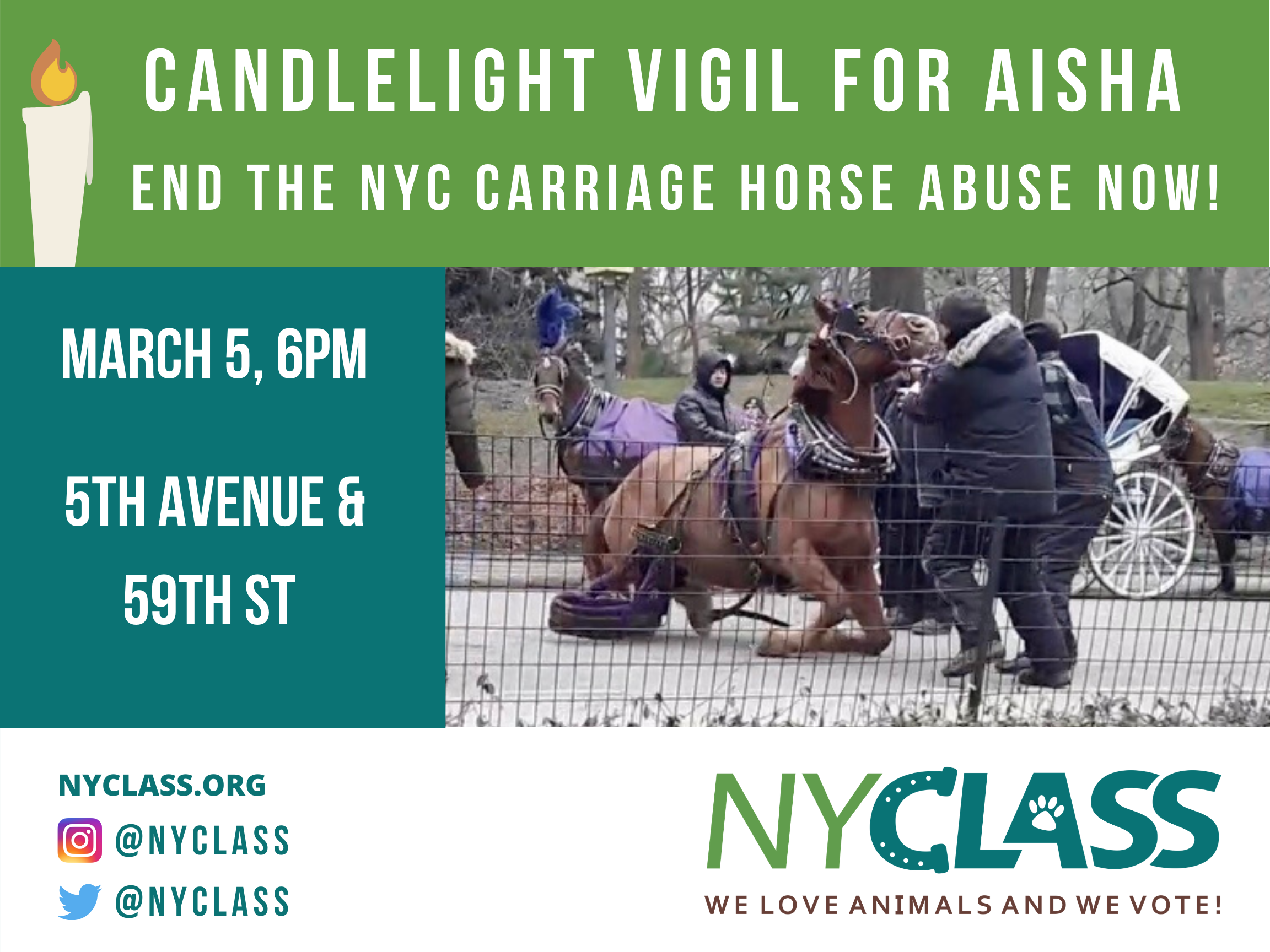 Please join NYCLASS for a massive Candlelight Vigil on Thursday, March 5 at 6pm, near Central Park at 59th St near Fifth Avenue and Grand Army Plaza for Aisha, the 12-year old carriage horse who violently collapsed in Central Park and died an agonizing death Feb 29th after being inhumanely handled by inept carriage drivers while she was having a medical emergency with NO veterinarian on site.

There will be a beautiful live musical performance dedicated to Aisha and footage on multiple TV screens showing the heartbreaking images of Aisha's gut-wrenching collapse and struggles before her death.

The NYPD Animal Cruelty Squad has launched an investigation into Aisha's death at our request and NYCLASS is calling on the City to suspend operationof the cruel and reckless carriage horse industry in the meantime. Just in the past few months TWO other carriage horses have died in addition to Aisha. In the past several weeks alone NYCLASS also documented and exposed an emaciated horse named Tommy being forced to pull a carriage with his ribs sticking out, and a different horse was electrocuted on the street, crashed and collapsed. NYCLASS has also documented and reported multiple carriage drivers routinely breaking the laws by forcing horses into congested traffic areas to illegally solicit rides.

Carriage horse abuse in New York City is OUT OF CONTROL. Enough is enough. It's time we end it!

PLEASE JOIN US ON MARCH 5th TO ENSURE THAT AISHA'S DEATH WILL NOT BE IN VAIN AND WE CAN CONTINUE TO GARNER WORLDWIDE OUTRAGE AND MEDIA COVERAGE TO END THIS ABUSE ONCE AND FOR ALL!

**Candles will be provided but bring your own if you have any.

**We encourage you to bring homemade posters that say "RIP AISHA" or any other messages that include her name.

**Media will be covering this vigil.

TAKE ACTION WITH ONE PHONE CALL

‼️ NYC RESIDENTS: Call your NYC Council Member to express your outrage over Aisha’s mistreatment and death, and urge them to support efforts to end this constant carriage horse abuse.

‼️If you live outside of NYC, call Mayor Bill de Blasio at 212.788.3000 and politely urge him to continue taking further action to help end carriage horse abuse for good.