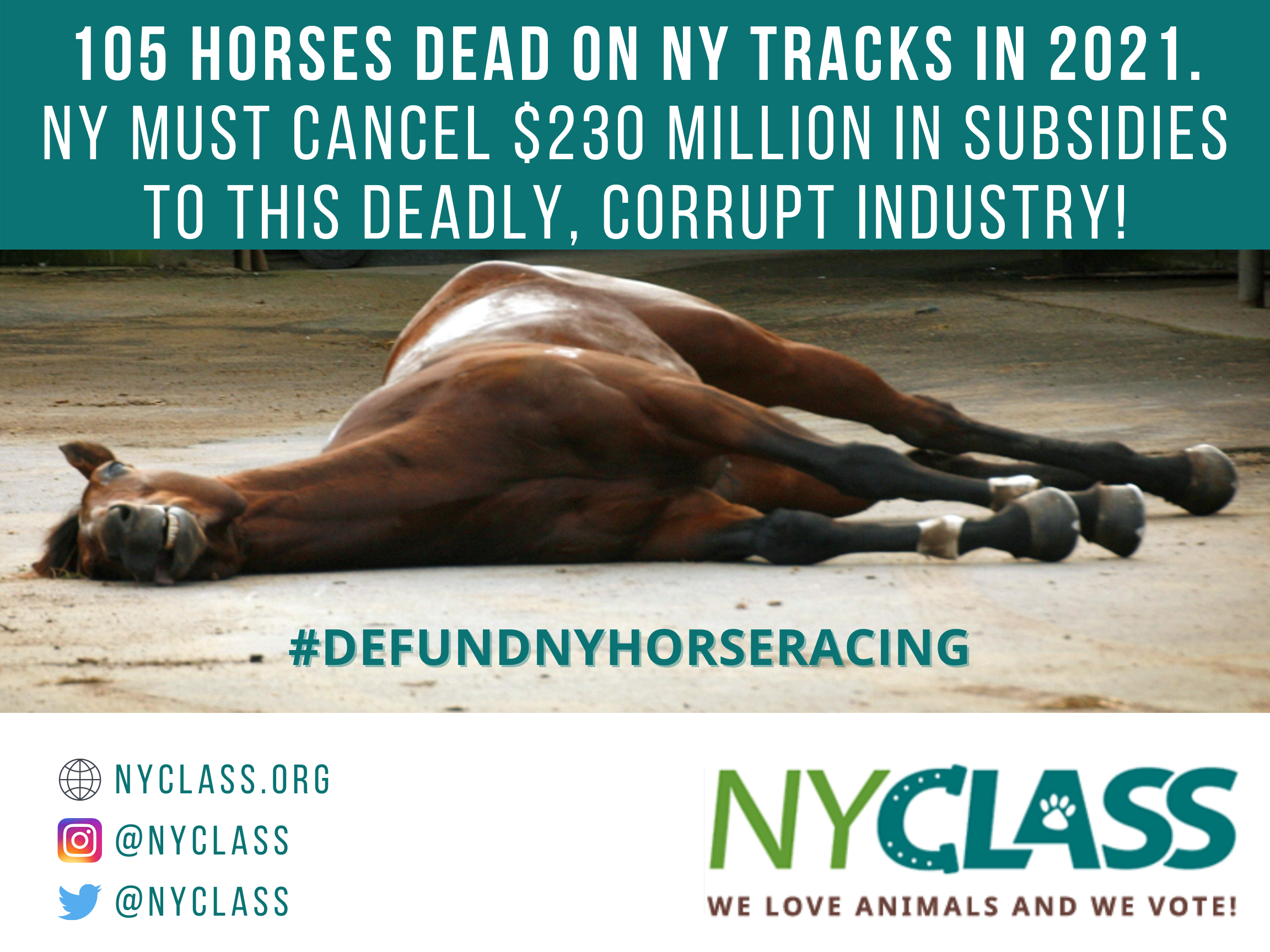 NEW YORK – A new report released today by the Coalition to End HorseracingSubsidies shows that 105 horses died at New York State tracks in 2021. With data compiled from the state’s Gaming Commission, the coalition highlighted some of the worst incidents of equine deaths in the last year. The 105 dead horses in 2021 represent an eight percent increase over the previous year. Since the beginning of 2018, 400 horses have died on New York’s racetracks.

The coalition renewed their push to cancel $230 million in annual subsidies to racehorse owners, breeders, and celebrity trainers, and to NYRA track operating expenses and capital improvements. Legislation pending in Albany will redirect this money to help New York’s taxpayers, schools, workers, and other social programs.

"Over the past 12 years, over 1,600 horses have died at NYS racetracks. More, still, were mercilessly slaughtered at the end of their so-called careers. To think that we, the taxpayers, are propping up this cruel, deadly industry to the tune of $230 million per year - and all coming at the expense of public-good needs like education and infrastructure - is, in a word, obscene,” said Patrick Battuello, President, Horseracing Wrongs.

Among the most horrifying incidents from 2021 include:

Thoroughbred Happy Happy B was only 2 years old when he died before crossing the finish line at Belmont in September of last year. His broken leg is visible in this gut-wrenching video.

When Belmont Park opened for the fall meet on September 16, 2021, Baltimore Bucko collided with Perfect Tapatino and was killed during the very first race.

Three-year-old Kj Chico was fatally injured during a harness race at Monticello Raceway in 2021. Drivers were violently thrown across the track.

No other state, including Kentucky, offers such generous perks to the privately owned businesses that comprise the racing industry. An industry with $2.5 billion in annual wagering should support itself and a strong majority of New York State residents agree. A February 2021 Marist poll found that 84% believe that racing subsidies should be redirected to education and human services, and an August 2021 poll found that 91% of those surveyed had no plans to attend races at any New York tracks.