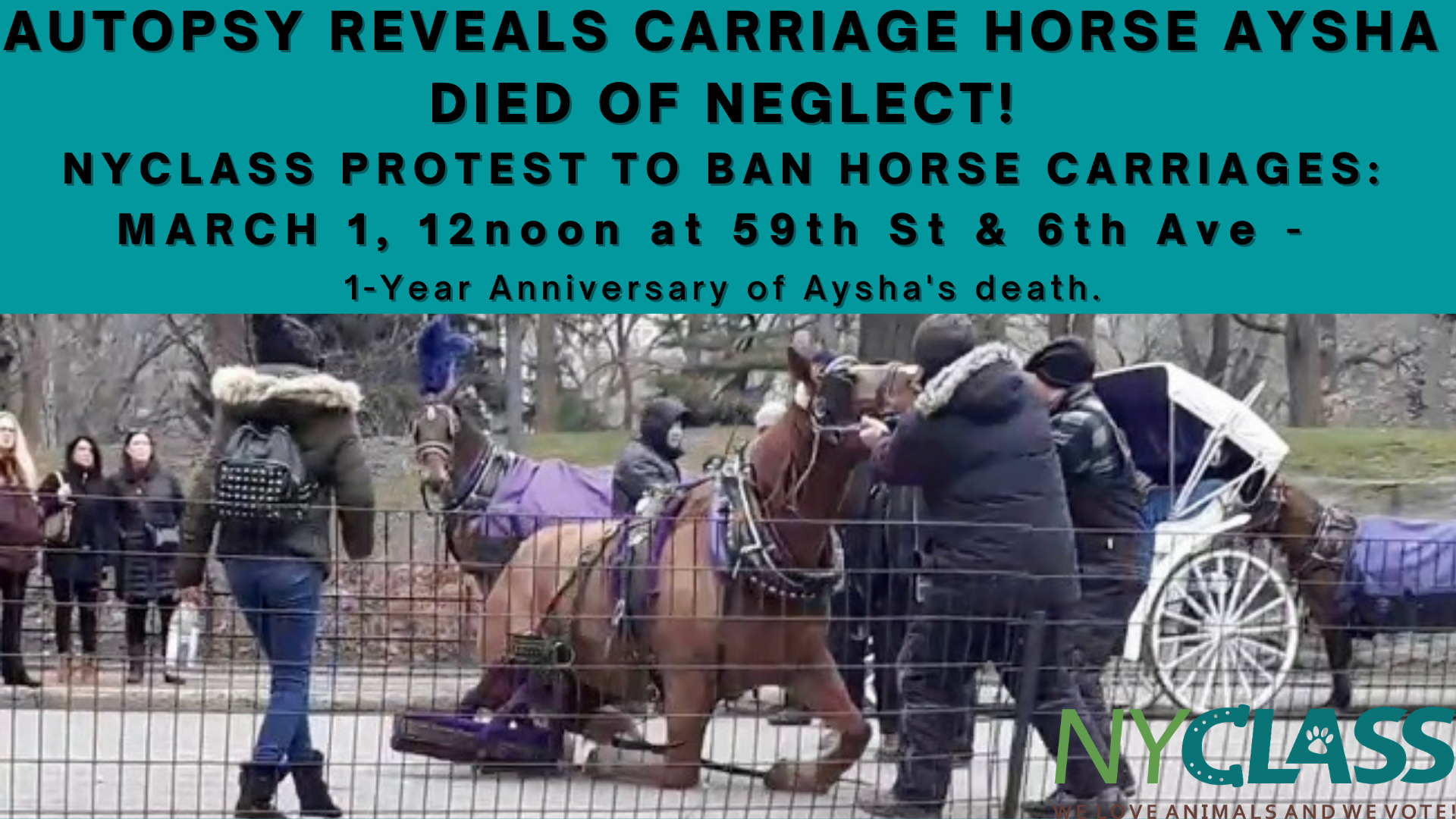 WHERE: 6th Ave and 59th St Entrance to Central Park.

New York - One year ago today, Aysha, a 10-year old New York City carriage horse, suffered a distressing collapse in public view at Central Park and was euthanized hours later.  Video of Aysha’s agony and carriage drivers dragging her downed body went viral.  The public, including elected officials, wanted answers. There were none until now.

Edita Birnkrant, NYCLASS Executive Director said, “NYCLASS and outraged people around the world demanded to know what caused Aisha’s painful death. Although carriage driver representatives falsely claimed that a cardiac event was the likely cause of her death, veterinarians asserted that such episodes are actually the most unlikely, and that video footage was instead highly suggestive of a common neuromuscular disease. Recently obtained necropsy results revealed the true, undiagnosed and preventable cause of Aysha’s death. Aysha, like so many other carriage horses – ultimately died of a deeply-rooted industry-wide neglect that is enabled by NYC’s Department of Health. It allows the substandard treatment of these horses to persist.”

NY Veterinarian Dr. Eileen Jefferson who serves as the NYS Representative for the Humane Society Veterinary Medical Association said, “Post-mortem biopsy results obtained recently confirmed Aysha’s collapse was indeed neuromuscular, and attributable to Polysaccharide Storage Myopathy (PSSM), or “tying up.” 1 Not only is PSSM extremely common in draft horses (with 39% of the horses in Aysha’s predominant breed affected),2 but the typical draft horse variant is diagnosable through a one-time genetic test.3 The potentially devastating effects of PSSM are then preventable in nearly all cases through changes in dietary and exercise management.4 PSSM can exist without symptoms for extended periods in some cases.5 However, due to the disease’s prevalence, many equine caregivers pursue the simple and inexpensive genetic screen in a horse’s pre-purchase exam. Others suspect PSSM from clinical signs or findings on routine blood panels - the kind Aysha only appears to have had performed at the time of her death.6 Despite such a high prevalence of this disease in draft horses, there has been no indication that the New York City carriage industry utilizes any of the available diagnostic screens to prevent the potentially excruciating and debilitating effects of PSSM." 6

Sick and suffering carriage horses are being continually worked, partly as a result of the industry’s inadequate in-stall vet exams. Some horses collapse and die on the street like Aysha, but others die less visibly in their stalls of colic or languish for years, forced despite their ailments and pain to pull heavy carriages. Common ailments in carriage horses such as  lameness, arthritis and chronic obstructive pulmonary disease are not properly checked for and therefore often remain undiagnosed. We can no longer accept this state of affairs in New York City in 2021 - the City Council must take action immediately to end this animal abuse.

NYCLASS has long asserted that forcing such large, sick animals to pull carriages on city streets poses public safety risks. There have been many carriage horse collapses and crashes with vehicles that have resulted in human injuries - more are inevitable.

Why wasn’t Aysha or any other NYC carriage horse given the simple screening test for PSSM that would have allowed for intervention?

Veterinarian Dr. Jefferson said, “For that to happen, one would need to prioritize the animals themselves, something often outside the interests of animal-exploiting industries. Just as puppy mill breeding dogs are not afforded the care and veterinary attention typical of in-home dog companions, industry horses are typically regarded more as commodities than sentient animals with individual physical and behavioral needs. The unfortunate and undeniable reality is that the diets, stalls, lack of access to pasture turnout, and inconsistent exercise levels characteristic of the NYC carriage horse industry are maximally conducive to PSSM. They also predispose to an array of other serious and life-threatening equine ailments – chronic obstructive pulmonary disease, lameness and colic high among them. Sadly, but unsurprisingly, two other NYC carriage horses were euthanized due to colic in the weeks preceding Aysha’s death."

For decades, veterinarians, elected officials, animal advocates and other concerned members of the public have issued criticisms of the NYC horse carriage industry. NYCLASS has repeatedly provided documentation of NYC carriage drivers’ lack of regard for horse welfare, public safety and laws designed to protect the horses. It states the carriage industry’s resistant attitude towards reforms and apparent lack of familiarity with the most common draft horse ailments only strengthens notions that the industry hinges on substandard treatment of its horses. At a time when Chicago and other cities around the world have ended horse-drawn carriages, it asserts that the NYC industry’s reluctance to meet humane expectations makes a ban more necessary.

Edita Birnkrant, Executive Director of NYCLASS said, “The New York City Council has the power to end this shameful abuse - and it's long overdue. Let’s not allow more horses to suffer for years and drop dead before we ban this animal abuse. Let’s not let Aysha’s preventable death be in vain. NYCLASS calls on the New York City Council to immediately hold a public hearing and to ban horse carriages once and for all, as so many other cities around the world have already done”

WHERE: 6th Avenue and 59th St Entrance to Central Park

NYCLASS (New Yorkers for Clean, Livable, and Safe Streets) is a a 501(c)(4) non-profit animal rights organization founded in 2008 on the core mission of saving NYC carriage horses, enacting animal rights legislation into law, and electing pro-animal candidates to office. NYCLASS is committed to changing the world for animals and seeks to create a truly humane society for all by passing New York City and State legislation, embracing grassroots efforts and on the street activism to educate and activate the public.