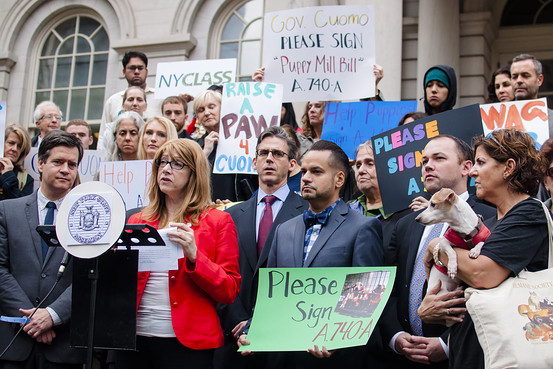 New York state and city legislators gathered at City Hall Friday morning to advocate for some of their cutest allies–puppies.

She is aiming to crackdown on commercial dog breeding facilities known as puppy mills and ensure that pet dealers are selling healthy animals from safe sources.

“Many dogs from pet stores are from puppy mills,” Ms. Rosenthal said in an interview, “and you bring them home, and they’re so cute, and then you find out they’re sick. … It’s a vicious cycle.”

The bill passed the state legislature and is awaiting Mr. Cuomo’s signature to become law. Ms. Rosenthal said she is “pretty confident” she’ll have Mr. Cuomo’s support. ”Animals rights is a huge conversation in Albany,” she said.

A spokesman for Mr. Cuomo said, “We are reviewing the legislation.”

Among the assemblywoman’s chief supporters are Amanda Hearst, the fashion editor and heiress, and Kimberly Ovitz, a designer whose clothes are worn by Chloe Sevigny and Lindsay Lohan.

“There’s a lot of muscle behind this,” said Ms. Ovitz.

Ms. Rosenthal is a longtime animal activist and may be among Albany’s premiere puppy advocates. But at home, Ms. Rosenthal said, “I have cats.”