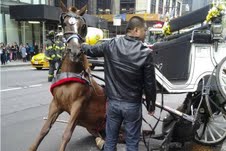 BREAKING NEWS: Yesterday, a spooked carriage horse named Chris flipped over in Manhattan. The terrified young horse was pinned to the ground and had to be cut from the carriage. Thankfully, the horse is suspended from work pending a vet exam.

It’s another chilling reminder of why it’s time to end this inhumane industry.

And frankly, had Christine Quinn won the mayoral primary election, it would have been business as usual for this callous industry.  But because you gave us the resources to defeat her, we know that no matter who wins the general election in November, this industry is coming to an end, and the horses will be retired to loving homes. Both mayoral candidates, Bill de Blasio and Joe Lhota, have pledged to stop the carriage horse industry. Humane voters have changed the entire dynamic in this city.

Horse drawn carriages in NYC are not just abusive and arcane, they pose a danger to the horse, the passengers and nearby pedestrians. This is a preventable problem that can easily be avoided if the City would listen to NYCLASS members like you.

New York needs to move forward and because of you, we’re closer than ever to electing a humane Mayor and City Council. Let’s step up and build this movement.