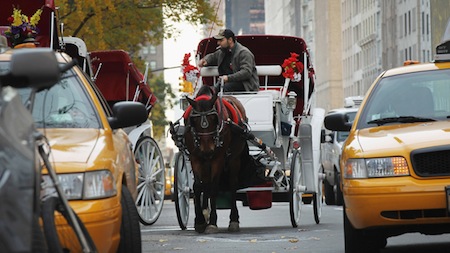 The New York Times reports that Oreo was standing in a line-up with other horse-drawn carriages along Central Park South around 4:20 yesterday afternoon, when the 6-year-old gelding suddenly bolted free of the group and began galloping into traffic.

It's not known what caused Oreo to become so spooked, though the most likely answer is that he is a horse from old timey times who accidentally time traveled to 2012 Manhattan and was frightened by all the cars and dubstep.

Oreo's driver fell from his perch as soon as the carriage took off. Oreo's passengers, a man and woman in their thirties who will probably never try to do anything spontaneous and romantic ever again, managed to hold on until the horse collided with a silver BMW in Columbus Circle, ripping off part of the car's bumper.

The carriage's passenger compartment (covered, but open air) broke off and toppled over.

Oreo then clipped a livery car, taking off part of its mirror, while also shedding the front half of his own carriage.

A witness told the Times that Oreo galloped a few more blocks then "slowed to a stop right behind the cars and waited for the light" between 58th and 57th streets.

While Oreo was busy trying to blend in (no horses here, just us cars obeying the rules of the road, neeeigh—I mean beep beep), a passerby and a policeman were able to grab hold of his harness and lead him to the sidewalk, where horses belong.

Oreo was tied to a pole and sedated with a tranquilizer dart, though he was still able to walk into the police truck that removed him from the scene just before 5 p.m. (He was arrested for unrelated drug charges.)

While his passengers and driver were all taken to the hospital to be treated for their various injuries, Oreo himself sustained only a minor scratch to his muzzle (and, of course, deep psychological wounds).

Small price to pay for becoming a legend.