'This Industry is Coming to an End': An Anti-Carriage Horse Group Declares Victory 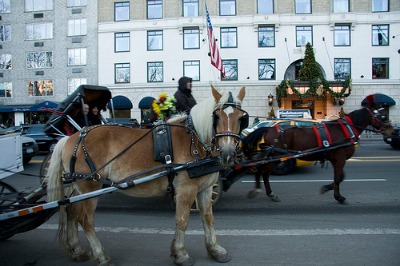 NYCLASS, a group that donated generously to Bill de Blasio's campaign and ran a series of influential ads against Council Speaker Christine Quinn, sent out an email to supporters this afternoon declaring that "no matter who wins the general election in November, this industry is coming to an end, and the horses will be retired to loving homes."

De Blasio, the Democratic nominee, has promised to abolish the Central Park horse carriage trade during his first week in office. Joseph Lhota, the Republican nominee, also supports banishing the carriages. Both would like to see the carriages replaced with some sort of motorized vehicle.

"And frankly, had Christine Quinn won the mayoral primary election, it would have been business as usual for this callous industry," wrote NYCLASS executive director Allie Feldman in the email to supporters. "But because you gave us the resources to defeat her, we know that no matter who wins the general election in November, this industry is coming to an end, and the horses will be retired to loving homes. Both mayoral candidates, Bill de Blasio and Joe Lhota, have pledged to stop the carriage horse industry. Humane voters have changed the entire dynamic in this city."

Yesterday, as the email also notes, a horse named Chris got spooked and a carriage flipped over on Eighth Avenue. According to a Daily News account of the incident, neither passenger nor horse were visibly hurt. Feldman writes that she's still awaiting the official report.

She called the incident, "another chilling reminder of why it’s time to end this inhumane industry."

Then she urged recipients to "make a contribution of $5 or more so NYCLASS can continue to fight the abuse of carriage horses and hold the politicians we elect accountable next year."

Earlier this month, a Kentucky-born horse carriage driver called during a "Brian Lehrer Show" interview with de Blasio and asked him how he justifies, "saying that within your first week as mayor, perhaps your very first act as mayor, you are going to get rid of small businesses, working carriage-horse families?"

"I think there is a good viable alternative, which is to have replica antique cars with electric motors that are clean and will provide tourists with a good experience and will provide the same people who now have horse carriages with an employment opportunity," he responded. "So I do care deeply about making sure there are jobs for working people. ... They'll just be different and they’ll be more humane."