3 Are Injured When Horse Sheds Coach in Manhattan

A carriage horse collided with a car near Columbus Circle, overturned its carriage with at least two passengers inside, shed the carriage and ran free for at least four blocks before being captured by the police on Thursday afternoon, the authorities and witnesses said.

New York Times City Room
16 August 2012
A carriage horse collided with a car near Columbus Circle, overturned its carriage with at least two passengers inside, shed the carriage and ran free for at least four blocks before being captured by the police on Thursday afternoon, the authorities and witnesses said.

A spooked carriage horse burst out of line near Central Park on Thursday, thundered into the busy traffic on Columbus Circle, dumped his driver and two passengers, struck two cars, shed the wreckage of his carriage and ran free for four blocks before being captured on Ninth Avenue, the authorities and witnesses said.

The horse, a 6-year-old draft gelding named Oreo who has a white and brown coat, suffered a minor scratch to his muzzle, said the American Society for the Prevention of Cruelty to Animals, which enforces carriage-horse regulations.

The accident was the latest mishap involving carriage horses near the park. The periodic accidents, some of them resulting in serious injuries, help feed agrowing campaign by advocates for animals to ban the carriage-horse trade in New York.

The chaotic scene unfolded around 4:20 on a sunny afternoon, when the park and Columbus Circle were jammed with people. One witness, Ernest Gaithers, said that Oreo and his red-and-white carriage were lined up along Central Park South with the other carriages when the horse bolted. The driver fell out of his seat and landed in the street, his leg bleeding, Mr. Gaithers said.

The horse headed toward Columbus Circle and hit a silver BMW, ripping off part of its bumper, Mr. Gaithers said, and the carriage began to fly apart.

The passenger compartment of the carriage, with a man and woman in its covered facing seats, broke off and toppled over, Mr. Gaithers said. Oreo, pulling the remains of his carriage, headed north.

“I heard the horse make a little noise, and then I ran into the intersection and saw the man and the carriage lying on the ground,” Mr. Gaithers said. 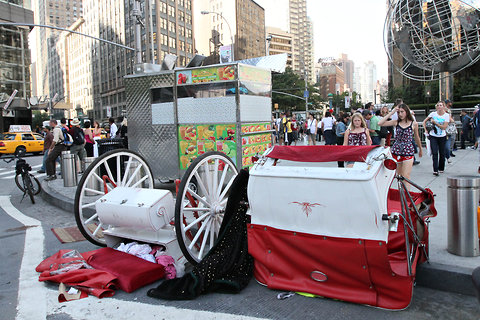 Sayed Elgandi, who works at a juice stand, said he and other bystanders rushed over and helped right the carriage and pull out the man and woman, who appeared to be in their 30s. The woman seemed relatively unhurt, but the man appeared to have hurt his neck or back and was put in a brace by medical workers, said Ginger Larcom and Debbie Shaver, tourists visiting from Portland, Ore.

Oreo then clipped a livery car, taking off part of its mirror, then shed the front half of his carriage and trotted west on 60th Street, said a man who gave his name only as Alvin P.

“I think he was probably running home to the stables,” he said.

Home for Oreo is Clinton Park Stables, on 52nd Street near 12th Avenue, but he did not get that far.

On Ninth Avenue, Joe Guarino, who works at a restaurant called Whym, said he was taking a break out front when the horse came “bolting down the street.” Between 58th and 57th Streets, Mr. Guarino said, “he slowed to a stop right behind the cars and waited for the light.”

A passer-by tried to grab the horse by the harness and lead him onto the sidewalk, Mr. Guarino, 27, said.

Oreo “was terrified,” Mr. Guarino said. “He was rearing, licking his chops.” 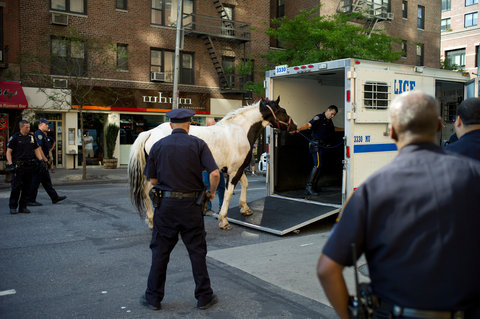 Finally, Oreo slumped to the ground. But he was able to stand up and get into the police truck that drove it away just before 5 p.m.

At Clinton Park Stables, a man who answered the phone but would not give his name said that both the driver and Oreo were in good shape.

“The vet is here, and he’s checked him out,” the man said of Oreo. “Everyone is fine.”